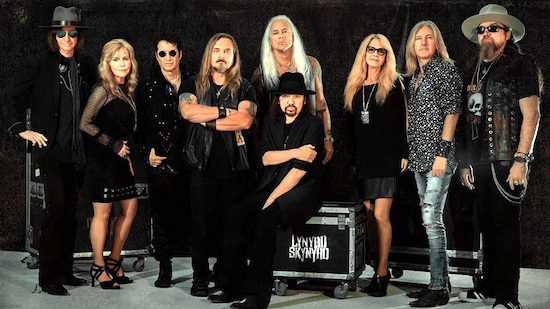 Lynyrd Skynyrd Farewell comes to The Big Sandy Superstore Arena Nov. 17th. Huntington is the 6th Stop till the tour says farewell to their fans. The farewell tour began May 4, 2018 and ends January 8, 2019 concluding at The Southern Rock Cruise Festival.

Lynyrd Skynyrd’s music is an American rock band best known for starting in the 1970’s leaving their genre of music on the 1970’s Southern Rock for years to come. The band gained worldwide recognition for its live performances and signature songs like “Sweet Home Alabama”, “Free Bird” and “Simple Man” and too many other great songs.

Throughout many generations fans have listened to Lynyrd Skynyrd,  as they have managed to survive for the last 50 years. What most music lovers know in 1977 band members Ronnie Van Zant, Steve Gaines and Cassie Gaines died in a heartbreaking plane crash putting an end to the band.

That is until surviving members reformed the band in 1987 for a reunion tour with lead vocalist Johnny Van Zant, the younger brother of Ronnie Van Zant. Since then they have held performances and venues all over the world. Selling 28 million records in the United States alone and over 60 million worldwide. They were rightfully inducted into the Rock and Roll Hall of Fame on March 13, 2006.

Fun fact the original band members went thru several band names such as “The Noble Five” and “One Percent”, before finally deciding on Lynyrd Skynyrd. The name came from their High School Principal, Lynyrd Skynyrd, who said, “They were wasting their time and would never go far”. They proved him wrong and that’s how they got their name. The Van Zant Family still lives in their hometown of Jacksonville, Fl. Where the band begun in the 1969.

So, what’s next for the Southern Rock Band? Ronnie Van Zant quoted to Haute Living,  “It hits you onstage and you’re like, Wow, this will be it,”  Van Zant said. “But we’re not getting any younger.”

“Gary’s had some heart trouble, so we decided this year, you know what, maybe it’s time to start doing stuff,” he added.

On November 17 Lynyrd Skynyrd will be here in the Tri-State Area at The Big Sandy Superstore Arena. Tickets are selling fast so don’t miss the final show. Putting an end to their touring but never an end to their music heard and loved all over the world.