GROWING UP IN LOUISA… Pumpkins!

Here it is October already and do I ever have a story to tell this time. Back when my kids were growing up I had to pause and remember back to those growing up times when I stood at my momma’s side and learned to carve a pumpkin. No doubt I was in grade school at the time when one of my teachers, most likely Mrs. Armstrong, brought in several of those big, orange melons so we might try our hand at carefully cutting out a face. The mouths were jagged and the eyes and nose were triangles. To a youngster, they were works of art, if a bit scary. 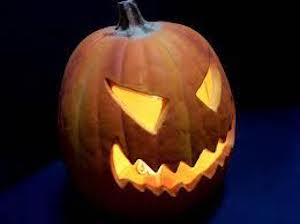 Our first step was to cut out a round opening in the top around the stem. Once it was cut it was easy to lift the ‘lid’ by pulling up on the stem. It was then that the mess was created, which explained why we carvers had to wear aprons. We had to reach down inside and pull out the guts. Surely the girls had to swoon. Such a site, but we had a big trash can that ended up with the stringy stuff. All the seeds and strings had to be removed we were told. I guess someone later had to clean that trashcan but at that tender age I had no idea how fresh cans were in place the next morning.

Inasmuch as there were teams working together, demonstrated talents for sculpture was evident with some and not so much with others. It wouldn’t’ be right to tell you which group I was in. Later, after the scary faces were done candles were inserted, the electric lights turned off, and candles were lit by the teacher.

It was years later, as in decades, before I saw some really fine examples of true pumpkin carving. Precision knives and saws are now used to make all kinds of images, including famous people, animals, and logos. If you’re interested I’m sure you can Google and find some outstanding YouTube demonstrations.

All throughout my childhood days my great-aunt Shirley Chapman would have one or another student bring us a big pumpkin. My cousins and I would do our best and put them on the porch for all passersby to 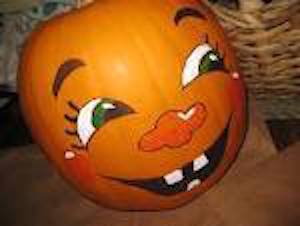 see. It was then that I experienced my first indication of how mean some kids can be. When I got up from a night’s sleep I found the carved pumpkins was the victim of pranksters. It had been picked up and smashed into many pieces. Tears ran down my face as I wondered why anyone would do that. I was to learn later that being a school teacher made you a target, sometimes. It wasn’t the pumpkin or me for that matter. It was my aunt they were attacking.

After I grew up and had kids of my own, a daughter and three young boys (had another boy later). I decided that since I lived on a main highway I might make a little pocket change that I could spend on the children. I knew that they would love a treat. If my idea went well, maybe I could take them to a local theme park for a day while teaching the kids about working to make money.

I had seen a story of someone who had painted faces on pumpkins rather than cut into them. This would allow us to save the pumpkins for making pumpkins pies, bread, and other things. That would be a second lesson but the teacher would be their mom. Even though my original thought was for display, I lined up the finished pumpkins on a table in our front yard. To my surprise a car turned into my driveway and the people went from pumpkin to pumpkin figuring out which one they liked best. They sold themselves! 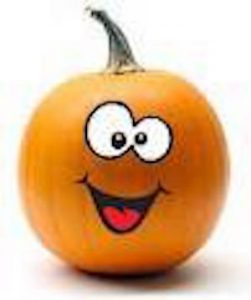 I was out of pumpkins in short order so I took my truck to a nearby farm and told the farmer what I was doing. He sold me a truckload at discounted prices in hopes I might be a good resource for selling his produce. It wasn’t long before I was getting another load and building up a lot of interest. One lady that owned an expensive dress shop pulled in driving her Rolls Royce while dressed to the hilt. She had to have one for her shop window. She chose one I had done of an overly made-up lady with pearls, eyelashes, and big lips. Go figure! Another lady wheeled in and wanted thirty of them for centerpieces at a conference she was sponsoring at a convention center. This little adventure had turned into a job! At the end of the season we had profits enough we took the kids to Disney World.

The following year people began knocking on our door wanting to know why we weren’t selling those delightful pumpkins! I whipped some up but didn’t want to be bothered spending all of October painting faces. Regardless, I did some for us every year. We bonded with our kids and had some fun, to boot. You know, it’s funny because I see those same faces all around, including the web, proving it is possible to pick something you like and let it become your job. I suspect one could do very well with just a little work and advertising.   mcoburncppo@aol.com

(This article is rewritten from one published in 2012)