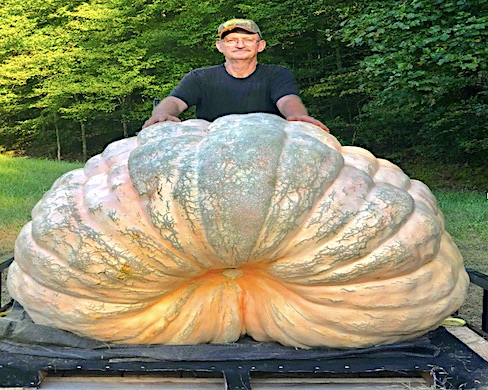 Robert Cyrus of Fort Gay, WV now holds new WV state record for the biggest pumpkin. The pumpkin was officially recorded at 1583.5lbs. on September 22.  The pumpkin dropped a few pounds before weighing at the WV Pumpkin Festival on Oct. 3rd in Milton, WV, still making it a whopping 1576lbs! The largest pumpkin in WV history, Mr. Cyrus also held the title last year. In 2017 his pumpkin weighed in at 1421lbs., this year he beat that record for the 2nd time! 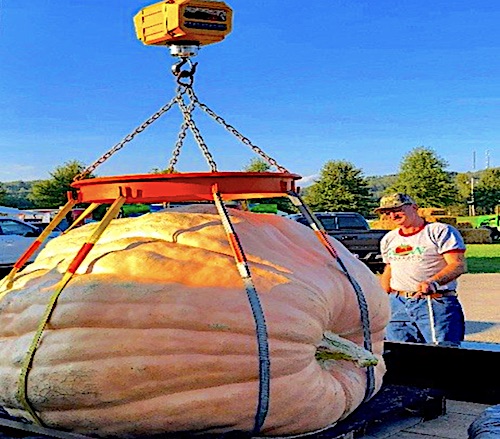 Pumpkins can be a hard job to grow, especially ones this large. Cyrus has a few tips for anyone wanting to grow a large pumpkin: frequent pruning, lots of water in dry periods, use of fans during wet periods, correct pest control, spraying for diseases.

The right soil is a key factor. He tests the soil and adds what is needed. The pumpkin needs the most nutrient rich soil as possible and rotating the plots is very important. He does use special fertilizers that his pumpkin grower friends recommend.

The pumpkins do all their growing in July and August so it’s important to tend to them daily. He does a lot of research and pricing online. They like sun but cover them with a shade tent to keep the pumpkin(s) from drying out. Too much water/rain can lead to huge problems with rot. The seed for the winning pumpkin was planted on April 28., it appeared at end the of June, and was cut from the vine in mid-September. 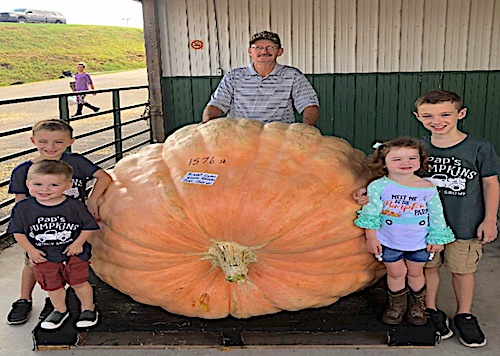 Cyrus and his grandchildren at the WV Pumpkin Festival

After the pumpkin festival came to an end the pumpkin was auctioned off. The money went toward a scholarship fund in Milton. Maneuvering a pumpkin this large is done so with extreme caution. It is strapped to a pallet and hauled on a trailer. Jerry Stout from Horner, WV has bought the winning pumpkin for the past 2 years. He displays it at his greenhouse, where lots of people stop by to take pictures with it.

“My dad is honored! But he does it for fun and for his grandkids! The whole family gets involved and that’s what makes him happy! He likes to tell everybody that his secret is sugar. My little girl hugged and kissed it in the garden and that’s what made it grow! All her sugars! His message that he wants to tell everybody is, Get off the computers and phone! Put them down and get outside!” 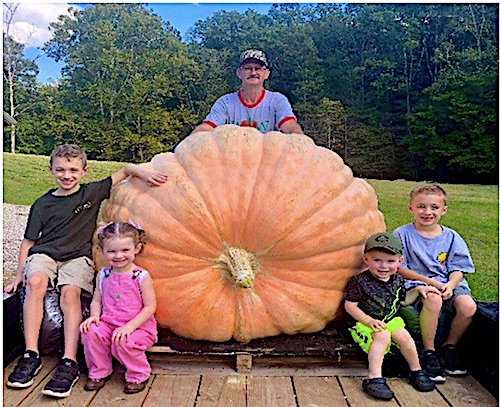