The 2018 golf league ended with a banquet held on Tuesday, September 25.  Bill England is the 2018 champion, and we all celebrated his victory with pulled pork and beef brisket, well-prepared and enjoyed by all.

Tuesday night, September 25, 2018, the league members celebrated the 2018 season with lots of food, fun and the presentation of trophies. It was a night spent with friends, somewhat melancholy because the league was over, and a few of the people we competed with will not be in the league next year. Many people in the league we only see in league play. So although it was a celebration, it was in some ways a goodbye for now.

The presentation of trophies was made by Troy Hughes, the new comptroller of league play. Troy’s job is a big undertaking, including scheduling, calculating points, fixing handicaps, and presenting awards. Notwithstanding all his other duties, Troy also prepared the meal for the banquet, which was delicious. I appreciate Troy for all the work he has done for the league. As many are aware, the threesome vying for the title consisted of Bill England, the 1st half winner, James Chaffin, the 2nd half winner, and Ronnie Wellman, the overall points leader. The winner among the 3, was calculated over 2 weeks, playing the back nine and then the front nine. This was the first year that we have had a split season, a decision made by Troy Hughes, and designed to end with a playoff. The finalist’s playoff scores were 68 (3 under par – Bill England), 70 (1 under par – Ronnie Wellman), and 73 (2 over par – James Chaffin). Following is a picture of the fearsome-threesome.

This was an excellent decision since it recognized those persons who were playing well at certain times of the season. The arrangement also allowed people to take vacations and not eliminate themselves from vying for the championship. The league will continue to use this format next year.

THE NEW LEAGUE CHAMPION IS BILL ENGLAND, OUR INTREPID OCTOGENARIAN.

Bill is a very deserving champion. He is the oldest member of our league (I can say that because I am right behind him). Bill helped form the Golf League with Jim Cooksey and has always been the person getting the trophies for the other players. I am glad that this time he will be choosing his own winner’s trophy. James will also receive an award for being the last half winner.

Following is a picture of Bill England as he received his two trophies, one as the first half winner and the other as the championship award. 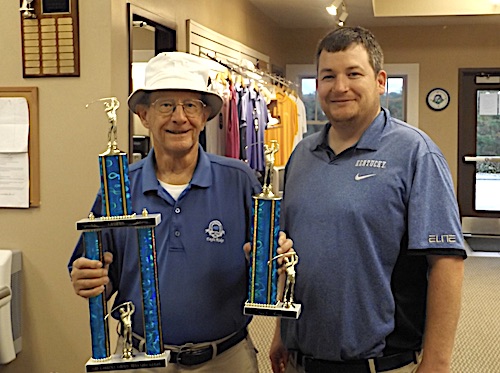 The presentation of the annual prizes ended the evening, or so I thought. The next thing I heard was “the party isn’t over yet.”

There was one more award presented at the banquet – to me! And it was unexpected, but it captured the moment perfectly. Playing golf is a beautiful, gentlemanly sport. Social manners, individual scorekeeping, and other such niceties make it a game of honor. However, even in such a polite and courteous sport, the rules of nature take precedence. And when I talk about the natural world, I am speaking not only of the laws governing our existence, I also am speaking of the actions of those humans who live within our environment.

There is an old saw, “If you have a secret you don’t live in a small town.” Likewise, if you are in a small group, such as our golf league, the same applies. So here is the true story as told by me, the master of embarrassing situations.

It was a beautiful summer day. My golf partner, J. Lynn See, and I were playing golf at Sugarwood Golf Course in Lavalette, West Virginia. We had reached the 12th hole and had hit our tee shot. The course was backed up due to a fivesome far ahead that was studying each shot as if was their last. Then mother nature called me with the “green apple quick step,” and she convinced me to heed her call. We were located where we could reach neither the “port-a-potty” nor the clubhouse. I directed my friend to pull over to the woods – NOW!

After having finished the business mother nature had demanded, it was time for me to cleanse. Without any paper goods, my friend gave me a molded, dirty, torn golf glove to finish my job. I appreciated this substitute for leaves, poison ivy and the like. I told the owner of the golf glove I was sure I would hear about this event at next week’s league. It was never mentioned again. Then two months later I receive the award.

Ronnie Wellman presented the award to me before all the league members. The “One Holer” also has several recordings that I was unaware of at the time. When my grandchildren saw the outhouse on my desk, they commenced playing with it and found the sayings.

I will leave you with this saying…

I thought it was hilarious, well done and apt for the situation. Now I leave you with this nugget that I learned many years ago, embarrassment will not kill you, and don’t take yourself so seriously. You actually are not that important.

This is my last report for the year. I wish each of you a Blessed Thanksgiving, a Merry Christmas, and a Happy New Year. Thanks to the Levisa Lazer for affording us a forum for the Eagle Ridge Golf League, and for other assistance given throughout the year. Thanks to Missy, Telia, and Dinah for their help in assisting the league, making calls, keeping charts and all the other things necessary to keep 25-men toeing the line.

Eagle Ridge Golf Course, along with the Campground and Marina, are all a blessing to Lawrence County. Whether you use any of these facilities, if you need to enjoy a nature reserve, just come out and take in God’s beauty.

See you at Yatesville State Park.

P.S. Sorry for this being so late; computer problems.