WATER BOARD CHAIRMAN SAYS 'NO DANGER' OF RUNNING OUT OF WATER 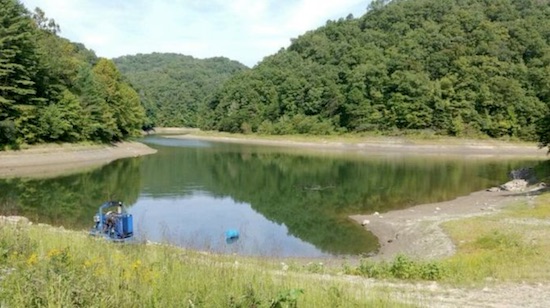 A reservoir that supplies thousands of Eastern Kentuckians with drinking water has fallen to a critically low level over the past month, prompting officials to declare a state of emergency and raising fear among residents that their faucets will run dry.

The Martin County Water District has been in a state of nearly constant crisis since a massive water outage in January, when it shut off service to residents for days at a time, leaving many of its roughly 3,500 customers struggling to bathe or cook.

The district’s most recent and pressing problem is the critically low water level at its reservoir.

“If something happens, the system just won’t have water,” said Mary Cromer, an attorney with Appalachian Citizens’ Law Center who has worked with a concerned citizens group in Martin County. “The system has been in this state of on-again, off-again crisis for the last month at least.”

The district spent about $100,000 trying to fix the pump, according to water board chairman Jimmy Kerr, but those attempts were unsuccessful.

Now, the district is renting two pumps — one to replenish the reservoir, and the other to transfer water from the reservoir to the treatment plant — at a cost of about $18,000 a month, plunging the cash-strapped district deeper into debt.

The district’s long list of issues include more than $1 million of debt, a staggering water loss rate that exceeds 70 percent, and a lack of trust among residents regarding water quality.

While Kerr said officials are not concerned about another water outage, the board passed a resolution last week declaring a state of emergency.

“Without reliable raw water pumps, the District will not be able to supply adequate water to the reservoir and treatment plant, ultimately requiring restrictions of water use and risking significant water outages in Martin County,” the resolution declares.

In an interview Friday, Kerr said problems with the intake pump need to be fixed as soon as possible, but assured the Herald-Leader residents should not be concerned about losing access to running water.

“Barring something catastrophic, I think we’ll be fine,” he said.

Cromer, though, said district officials are likely downplaying the seriousness of the situation.

The district is currently pursuing a rate increase of about 18 percent to cope with mounting debt and a long list of overdue operational repairs, including leaking service lines that cause the district to lose a majority of the water it treats before it reaches customers.

That increase, if approved by the state’s Public Service Commission, which regulates most utilities in Kentucky, would come on top of an already-implemented 18 percent emergency rate increase granted earlier this year.

Officials have warned for months that without additional cash, the district will collapse.

PSC officials have been highly critical of the district for its past and current management practices, which officials say caused the district’s current crisis.

During one hearing, PSC commissioner Micheal Schmitt said Martin County was “the worst water district, in my opinion, in the state of Kentucky.”

He has since reiterated that opinion, criticizing its lack of controls on employee spending and its failure to hire a general manager, among other things. The district’s previous manager, Joe Hammond, abruptly retired in February.

The district now is managed by interim manager Greg Scott, who Cromer said has been unable to right the district’s ship despite his best efforts.

“They need to hire a professional general manager,” Cromer said. “Now they’ve announced they aren’t going to do that until after the rate increase.”

In addition to the rate increase, the district is waiting on two grants that could help alleviate its current crisis.

One, from the federal Abandoned Mine Lands program totaling $3.4 million, will be used to pay for a new intake pump and upgrades to the district’s water treatment plant.

The district will review proposals for that project soon, possibly in the next week, Kerr said.

The other grant — $1.2 million from the Appalachian Regional Commission — will be used to repair and replace leaking service lines.

“In the meantime, the threat of a looming crisis is very real to the people of Martin County and the district is sinking farther and farther into debt as it spends more and more unbudgeted money on withdrawing raw water from the river,” Cromer said in an email to the Herald-Leader.

BarbiAnn Maynard, a district customer and vocal member of the Martin County Concerned Citizens group, described the district’s attempts to correct the ongoing problems as “putting Band-aids on a severed artery.”

“And we have no more blood to bleed out,” Maynard said.

Maynard said she now hopes the Public Service Commission will put the district into a state of receivership, which would give control of the water district to an outside utility.

She said receivership, or some similar major intervention by the state, is the the only way to ensure residents have access to safe, reliable drinking water.

In June, Attorney General Andy Beshear announced his office had opened an investigation into the district’s current and past management. Earlier this month, a spokesman for Beshear said his office had conducted interviews in the case, and is continuing to compile records.

Some residents have long complained about the district’s water quality, posting pictures and videos online that show dirty water flowing from their taps.