THE NEW LEAGUE CHAMPION IS BILL ENGLAND AT EAGLE RIDGE

For the two past Tuesdays, Mother Nature gave the players vying for the league title no excuses, and they needed none!

Tuesday night, September 18, 2018, completed the 18-hole Eagle Ridge Golf League Championship. The participants were the first half winner, Bill England, the second half winner, James Chaffins, and the overall season winner in total points, Ronnie Wellman. The match was indeed a shootout, and no one wanted anything less. The players were well matched, and the three had experienced the fray before. With the pressure mounting with every shot, the three battle it out. It ended as anybody’s opportunity to grab the win.

The first week, 9-holes played on the back nine, ended with all three breaking par of 36. Bill England had net 32, Ronnie Wellman shot a net 33, and James Chaffin scored a net 35. Four, three and one under par. Not too shabby, and everyone was in the race. Then came September 18. All three had been sleeping on their scores, and I can tell you that each of the three craved the win. The winner has his name engraved on the trophy in the clubhouse. This is for posterity, something tangible that you can point to. And now is when the boogie man comes.

On September 18, teeing off on the front nine, the toughest nine, par 35, I am confident that each golfer was fighting to keep his nerves under control. Remember, three strokes were all that separated them. Then, on the first hole, James had a par, while Ronnie had a bogie and Bill had a double. The three tied on the second hole. But then came the third hole, a demanding par 3. James and Ronnie carded a par while Bill took a 5-over. Take a deep breath. Bill had lost 50% of his handicap to the other players, James had lost only 11% of his handicap, and Ronnie had lost 40% of his handicap, and they were only one-third of the way through the match. Who do you have your money on?

Now comes hole #4, the most challenging golf hole in the tri-state. From the tee, you must drive across a cavern to reach the fairway to set up your second shot. From the upper fairway, if you are lucky enough to hit it, you have a choice of smacking the ball across a hollow to a shorter “bailout” fairway, or, if you have hit the ball far enough in the upper fairway, you can hit over another cavern to the narrow lower fairway. The lower fairway is guarded its entire length by a creek on the right and a rugged hill covered with dense underbrush on the left. Your approach shot must thread these two hazards as the fairway becomes narrower and narrower as you draw near the green. It indeed is a hole that has my number. This was the next hole for the combatants.

On number 6, Ronnie had a double bogey, James had a double bogey, and Bill had a bogey. Ronnie had now exhausted his handicap and was 1-over, James had a double bogey, and was 1-under par, and Bill bogeyed the hole and also was 1-under. Then came the “Cavern of Doom,” appearing to lie in wait just to grab James’ golf ball. James went 4-over on number 7, which placed him 3 over par. Ronnie and Bill each bogeyed the hole, leaving Ronnie 2-over and Bill 1-over. Ronnie and James both rallied, paring 8 and 9. However, it was too late, Bill parred 17 and bogeyed 18. On the front nine, Ronnie was 2-over, James was 3-over, and Bill was 1-over.

The ending scores were:

THE NEW LEAGUE CHAMPION IS BILL ENGLAND, OUR INTREPID OCTOGENARIAN.

Bill is a very deserving champion. He is the oldest member of our league (I can say that because I am right behind him). Bill helped form the Golf League with Jim Cooksey and has always been the person getting the trophies for the other players. I am glad that this time he will be choosing his own winner’s trophy. Ronnie and James will also be receiving the second and third place trophies.

The awards banquet will be held at the clubhouse on Tuesday, September 20, 2018, at 6:00 PM. Food is furnished, and there will be a trophy presentation. Make sure you attend because the food is free. Actually, all our 3-putts makes it free!

See you at the banquet. 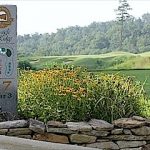