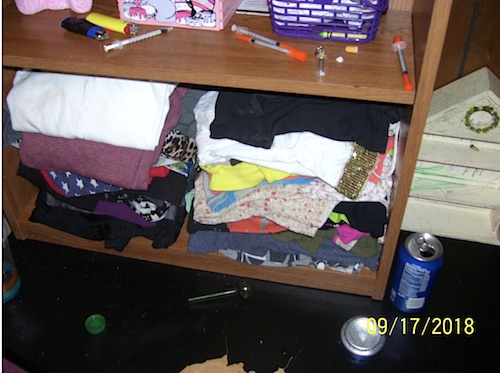 On September 17, 2018 officers with the Lawrence County Sheriff’s Office and Kentucky State Police acting on a tip went to a residence on East Powhatan Street to attempt to locate April Harper, 34 of Louisa, who was a fugitive.

Upon arrival the officers located Harper in the residence. During the arrest of Harper Chief Deputy Mark Wheeler located Joseph Davis, 42 of Stoney Point, NC in a bedroom shared by Harper. In plain view Deputy Wheeler observed several syringes, a glass pipe used to smoke methamphetamine, small container with crystal meth and other paraphernalia. When Davis was removed from the room it was discovered that Davis had been sitting on another meth pipe.

The Louisa Police Department also responded and assisted at the scene during the arrest. Chief Deputy Wheeler is in charge of the investigation.

This is just one example of multiple agencies working together to keep the community safe. If anyone has information on illegal drug activity or the location of a fugitive they can contact the Sheriff’s Office at 606-638-4368 and as always they can remain anonymous.