ARREST LEADS TO RECOVERY OF STOLEN CAR, ATV, OTHER EQUIPMENT...

SUBJECT FROM LOWMANSVILLE CAUGHT IN THE ACT BY DEPUTY FOR SECOND THEFT ATTEMPT AT SAME JOHNSON CO. BUSINESS HE HAD ROBBED DAYS EARLIER!

ARREST LEADS TO RECOVERY OF STOLEN CAR, ATV, OTHER EQUIPMENT…

LOWMANSVILLE, KY. — The Johnson County Sheriff Department arrested a Lawrence County man in connection with the recent alleged theft of property from a  business in Johnson County.

Jamie Lee Marcum, 32, from Lowmansville in Lawrence County has been arrested on seven counts and is lodged in the BSRDC on no bond.

Marcum was seen on surveillance video burglarizing the business, after law enforcement officers were notified of suspicious act and discovered the suspect leaving the same business after just committing a second theft, leading to a wild vehicle, and then foot chase .

According to information from a criminal report from the Johnson County Sheriff Department, deputies were investigating a theft of property from Ferguson Excavating, located in the Wittensville community of Johnson County, that happened over this past weekend.

The investigation concerned the weekend theft of a pickup truck, a trailer and a side-by-side ATV that was caught on security video.

According to the first criminal report regarding the first theft, Johnson County Sheriff Department on Sunday, September 16, 2018 at approximately 3:08 P.M., a White Chevy 4-door truck along with an attached trailer that had a green Polaris on it, was stolen from Ferguson Excavating and Pipeline in the Wittensville area of Johnson County on Route 1559.

A man can be seen on video released by the Sheriff’s Department and was available on the Sheriff Department’s Facebook page. The owner of the truck, trailer and ATV was offering a reward for information that could have lead to an arrest of the then unknown person who was responsible.

VIDEO SURVEILLANCE OF THEFT OF TRUCK, TRAILER, AND ATV AT JOHNSON COUNTY BUSINESS BY THEN UNKNOWN ROBBERY SUSPECT, WHO WAS LATER IDENTIFIED AS JAMIE MARCUM OF LOMANSVILLE AFTER SECOND THEFT ATTEMPT AT SAME BUSINESS 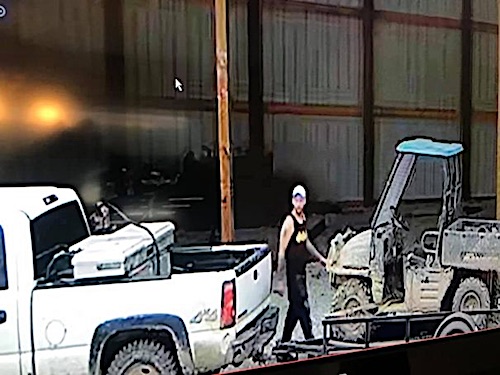 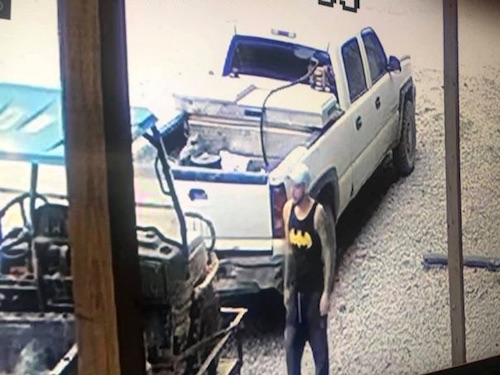 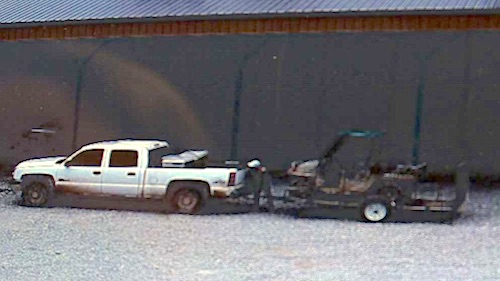 On early Monday evening, another call was received by the Sheriff Department about two chainsaws being taken from the same business. As deputies were at the business location, they were notified by a passerby that a male was seen nearby loading two chainsaws into a green car. When leaving to locate that vehicle,

Johnson County Sheriff Dwayne Price said when they caught up to the theft suspect who later be idenitfied as Jamie Lee Marcum, 32, from Lomansville in Lawrence County, he was not alone, as there was a woman driving him around.

“When they pulled the car over Mr. Marcum opened the car door and shoved her out. He then slid behind the wheel and that is when the chase began,” said Sheriff Price.

The police chase ensued onto Hilltop Road in the Nippa community. Chief Deputy Pelphrey would block the vehicle’s escape route and the car ended up striking a guardrail and later fishtailed out of control and flipped over, landing in the creek on its roof.

Sheriff Price said Marcum ran through a guardrail, ran his car over a creek and flipped over.

“He got some substantial injuries, to his head requiring staples, and also his leg as well,” Price said.

After placing Marcum under arrest, he was transported to Paul B. Hall Regional Medical Center for treatment of some minor injuries before being transported to the Big Sandy Regional Detention Center.

Once he was in handcuffs, Sheriff Price said Marcum tried to strike a deal…

“He made the comment that he knew where a stolen truck, four wheeler, or a side by side and a trailer was. And they were all located on Peach Orchard in Lawrence County,” said Sheriff Price. “We contacted the Lawrence County Sheriff and he sent a deputy up there with us and we recovered all three items.”

Chief Deputy Pelphrey reported that Jamie Marcum agreed to take Deputies to the location he had sold the side-by-side and trailer to a third party, who was unaware the items had been reported stolen. Deputies also recovered the truck.

Once at the jail, Sheriff Price said Jamie Mullins opened the door of the cruiser and tried to run away.

“The deputy grabs him by the gown he got at the hospital and of course, he came right out from under it and he went right around the front side of the jail and scaled a fence and fell and that’s where we apprehended him at,” said Sheriff Price.

Chief Deputy Pelphrey, who was the arresting officer in the case, said in all, Jamie Marcum was charged in total with seven criminal offenses:

Jamie Marcum is being held in the Big Sandy Regional Detention Center in Paintsville with no bond.