BOE adopts compensating tax rate, lower than the possible 4% the board is allowed each year 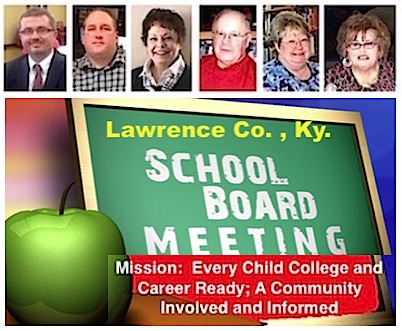 On Monday (September 17), the Lawrence County Board of Education began their regular meeting in the Fallsburg gymnasium by recognizing the work of the Fallsburg Junior Master Gardener Club.  Members Rheanna Bateman and Bryant Moore along with the staff sponsor, Craig McDavid, shared with Board members that the Gardener Club was involved in school clean-up efforts as well as developing a butterfly garden, along with other activities.  Mr. McDavid also thanked the Lawrence County Master Gardener Organization and other community sponsors for their support.  To close this portion of the meeting, Dr. Fletcher presented each member with a Certificate of Recognition on behalf of the Board of Education, then continued with the next item on the agenda, Superintendent Communication.

Lawrence County Schools’ teachers were given the opportunity to apply for various grants during the summer, and the results did not disappoint.  First, representatives of the Kentucky Valley Education Cooperative (KVEC), which is based in Hazard, KY, awarded $1000 classroom innovation grants to Susan Adams (Louisa East), Andrea Rowland (Louisa East), Courtney Kingsmore (Louisa East), Erin Giesler (Blaine), Kim Shirkey (LCHS), David Prince (LCHS), Melissa Branham (LCHS), and Emma Price (LCHS).  Each teacher submitted applications for projects that promoted innovation in the classroom, and with the award, each teacher will be presenting their work in regional innovation conferences held at the Pikeville Expo Center. Second, the Steele-Reese Foundation group awarded a $10,000 grant to Ms. Stephanie Kirk for upgrades in the Blaine Elementary Media Center.  This was the second time that Ms. Kirk received the award on behalf of the students of Blaine Elementary.

To add to this good news, Dr. Fletcher shared other informational items:

The 4% increase would essentially require property owners to pay a higher rate than the compensating rate in order for the school system to collect approximately 4% more money than the year before from tax payers.  (As a safety net, the state government would automatically assign the compensating rate to a school system if its board of education members took no action.)

Before the vote, Dr. Fletcher informed the Board that Lawrence County has one of the lowest property tax rates in Eastern KY and ranks as the 66th lowest when compared to the other 172 districts across the state.

As for the motor vehicle tax, Lawrence Countians pay the 4th lowest tax rate in the state, again, when compared to the other 172 districts.  After these discussions, the Lawrence County Board of Education voted unanimously to accept Dr. Fletcher’s recommendation of taking the compensating tax rate for 2018-19.  Along with this decision, the Board of Education voted unanimously for no increase in the utilities tax rate and for no increase in the motor vehicle tax rate.

Other items included the approval of financing two new buses, of purchasing camera systems for the remainder of the bus fleet, of purchasing internet system upgrades, and of accepting bids for snow removal.