Hope is in pre-school numbers, which have dropped

By Melissa Patrick
Kentucky Health NewsKentucky’s high-school students have been getting fatter, but obesity among preschoolers in the Women, Infants and Children nutrition program has been dropping, according to the latest national State of Obesity report. 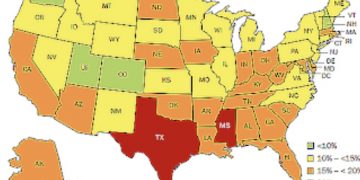 The figures come from the Youth Risk Behavior Surveillance system, a continuing national survey of that age group. The report said last year was the first in which the poll found any state with a youth obesity rate over 20 percent.

Another survey, the National Survey of Children’s Health, says one-third of Kentucky children between the ages of 10 and 17 were either overweight or obese in 2016.

The news was better among children aged 2 to 4. Using figures from the WIC program for low-income mothers and children in 2014, researchers found that 13 percent of Kentucky children in the program were obese, a significant drop from 18 percent in 2010. The 2014 rank was 32nd among the states. 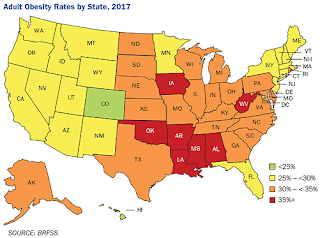 Over the past five years, the Foundation for a Healthy Kentucky has worked with and funded efforts in six Kentucky communities to reduce childhood obesity.

“What we’ve learned through these grants is that it takes a coalition of partners committed to system-wide changes that make better nutrition and increased physical activity easier and more likely for everyone,” Foundation President and CEO Ben Chandler said in a news release. “It’s hard work and it takes long-term commitment, but it’s imperative to getting Kentucky back on track to better health.”

Preventing obesity in children can return long-term dividends. Research shows that children who are obese or overweight often grow up to become obese and overweight adults, and the number of obese adults in Kentucky is not getting any better.

“The obesity rate in the Commonwealth has been on a dangerous trajectory for nearly two decades, tracking a national trend that is costing the state billions in health care and lost productivity, and jeopardizing the health of 1.1 million Kentucky adults every year,” Chandler said.

The only states with higher obesity rates than Kentucky are West Virginia, Mississippi, Alabama, Arkansas, Louisiana and Tennessee. The report says that seven states had adult obesity rates at or above 35 percent in 2017 and no state had a statistically significant improvement over the past year.

While the report primarily focuses on obesity, it also shows that the number of Kentucky adults who are either obese or overweight is much larger, 67.2 percent.

The figures come from the federal Centers for Disease Control and Prevention‘s Behavioral Risk Factor Surveillance System, an ongoing poll. Adult obesity rates by county are available at KentuckyHealthFacts.org.

The national report, “The State of Obesity: Better Policies for a Healthier America” was done by the Trust for America’s Health and the Robert Wood Johnson Foundation.

African Americans in Kentucky are the most likely racial or ethnic group to be obese, at 40.2 percent, followed by 34.4 percent of whites and 28.5 percent of Latinos. More men in Kentucky were obese than women: 36 percent and 32.5 percent, respectively.

State ranks last in physical activity, and all this costs us

These numbers cost money, according to a report from the United Health Foundation, the American Public Health Association and Partnership for Prevention. It says that starting this year, Kentucky is expected to spend $6 billion annually in health care costs directly related to obesity.

The State of Obesity report looks at several of those obesity-related health issues.

It shows that Kentucky’s diabetes rate has inched down a bit since it hit its highest rate ever in 2015, 13.4 percent, but at 12.9 percent, the state still ranks seventh in the nation. The researchers estimate that nearly 600,000 Kentuckians will have diabetes in 2030.

The state’s rate of high blood pressure, at 39.4 percent, has remained about the same since 2013. Kentucky ranks fifth for hypertension and the report projects there will be nearly 1.2 million Kentuckians with it in 2030.

Given the above numbers, it is no surprise that Kentucky ranks first for the percentage of adults who are not physically active, 34.4 percent.

The report calls for widespread implementation of evidence-based programs, policies and practices to reverse the obesity trend, including efforts that take a multi-sector approach, approaches that make the healthy choice the easy choice and investment in programs that narrow health inequities. Toward this end, the researchers offer 40 specific recommendations for federal, state and local policymakers; the restaurant and food industries and the healthcare systems.

“The good news is that there is growing evidence that certain prevention programs can reverse these trends. But we won’t see meaningful declines in state and national obesity rates until they are implemented throughout the nation and receive sustained support,” John Auerbach, president and CEO of Trust for America’s Health, said in a news release.

Posted by Melissa Patrick at 5:46 PM
ShareTweetShareSendPinShare
Next Post

MELISSA MARTIN: WHEN SURGEONS ARE IMPAIRED