SOAKIN’ UP THE SUN; REDUCING UTILITY BILLS IN W. KY 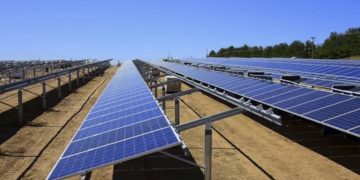 Kentucky is about to catch some rays in a big way.

A new solar farm coming to Western Kentucky in 2022 promises to be the state’s biggest — by a wide margin.

Some 800 acres of solar panels are planned for Lyon County, just north of Land Between the Lakes National Recreation Area. At their midday peak, the panels are expected to produce 86 megawatts of power, or among the top 2 percent in the nation for solar plants, according to data from the U.S. Energy Information Administration.

The Kentucky Municipal Energy Agency, a group of 11 city-owned utilities, agreed last week to purchase the majority of that power starting in late 2022, with the rest planned for Owensboro Municipal Utilities, pending board approval.

For Kentucky Municipal Energy Agency CEO Doug Buresh, whose agency will start delivering energy to member utilities next year, that’s a sign renewable sources are gaining traction. Buresh said he expects more plants to open in coming years and that the agreement to buy solar power demonstrates its commitment to environmentally friendly sources.

The plant will power the equivalent of 14,000 Kentucky households and supply 8 percent of the energy needed by customers in Barbourville, Bardwell, Corbin, Falmouth, Frankfort, Madisonville, Paris and Providence, the agency said in a news release.

The Kentucky Municipal Energy Agency has drawn scrutiny for leaning heavily on coal-fired plants. In its first three years, two-thirds of the group’s energy will come from coal. Starting in 2022, Buresh said he hopes to change that. The new solar plant would still, however, fill less than 10 percent of the group’s energy needs.

“There is more work to do, but now our portfolio includes purchases of energy from coal and natural gas-fueled plants, hydroelectric facilities, the solar project, and even small diesel engines located in Paris,” Chris Melton, agency board member and electric superintendent of Madisonville Utilities Department, said in a statement. “We are truly building a diverse portfolio to provide more affordable power to our customers.”

The new solar plant’s builders are Texas-based Open Road Renewables and MAP Energy, an investor in renewable energy projects with offices in Oklahoma and California.

“This single 86 MW solar project is cost-competitive with fossil generation and will result in roughly 400 construction jobs to the region,” Open Road Renewables Vice President Mike Volpe said in a statement. “This project should be seen as a win-win as it will provide both local economic development benefits to Western Kentucky along with affordable power for KyMEA members. We are pleased to see in-state, utility-scale solar selected by KyMEA as part of their least-cost supply portfolio.”