TOTALS NOT IN FOR BAHAMA MAMA, ROTARY HAS PROFITS

LOUISA, Ky. — (Thursday, Sept. 13)  Rotarians met for their weekly meeting Thursday, After the community prayer, Pledge of Allegiance and Four Way Test. New President Steve Lycans began with birthdays for the week. Rotarian, Brother Scot Horksema celebrated his and the club sang Happy Birthday. Next was club business, the club talking about Septemberfest. It’s always Competitive to see which president has raised the most money. 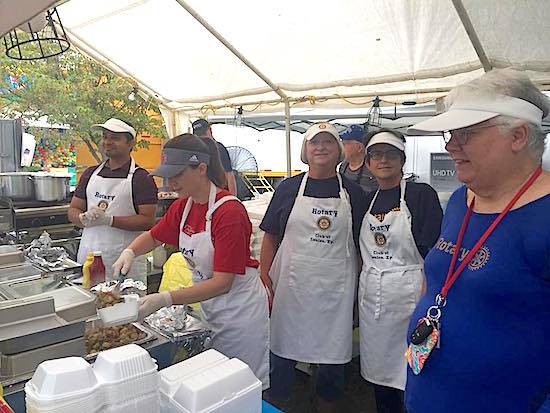 On Bahama Mamas and the famous Rotary Hash. the totals were not in yet, but the club was pleased with the turnout and Lycans stated, ” I want to thank the community for showing up and helping this become another successful fundraiser that will be spent right back in the community.”

The speaker of the week was Atty. Bud Adams. Adams spoke to Rotarians about one of the Presidents he feels doesn’t get enough credit. He spoke on history and how James K. Polk was one of his favorite and one of the most monumental presidents even though there is no Monument with his name or any place of recognition for him.

Since I visited Rotary last, the officers’ have changed for the future year.

President Chris Jobe handed the title to Steve Lycans (left). Vice president Elaine Desario,  Joe Hart is Treasurer and Ginger Copley is Sergeant at Arms. Ellen Taylor stayed on as the secretary.  This year’s theme is “BE THE INSPIRATION”.

With that the meeting was adjourned for the week.