PRICHARD. W.VA. MAN INDICTED IN CONNECTION WITH MURDER OF NEIGHBOR 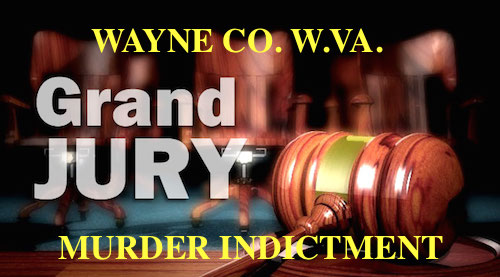 WAYNE, W.VA. — An indictment has been secured by the Wayne County grand jury for the murder of Kenneth Edward Davis, 53, of Prichard, WV.  Davis was killed in February of this year and his body was found at his home on Ferry Street.

Patrick Nelson Cyrus, his neighbor was indicted in July but indictments only come out every three months in Wayne, West Virginia.

The indictment states that Patrick Cyrus committed the offense of murder by unlawfully, feloniously, willfully, maliciously and premeditively slaying, killing and murdering Kenneth Davis against the peace in dignity of the state, based upon the testimony of S. G. Poff of the Wayne County Sheriff’s Department’s sworn testimony before the Grand Jury.

According to court records, during the investigation Patrick told in a recorded interview with the Wayne County sheriff’s department that Davis stole a pressure

washer from him a couple months prior to the murder. Patrick also said that he and his son Kevin, told Davis he had 48 hours to return what was stolen. Investigators say Davis returned the pressure washer and apologized.

On February 16, 2018 Patrick and Kevin Cyrus, 44, were drinking alcohol in the garage according to the criminal complaint. Patrick told deputies that the incident was brought up again, the pair became angry and decided to scare Davis.

According to the criminal complaint both put on masks and went to Davis’ house. The investigators say Davis came to the door but was scared and tried to shut it. That’s when deputies say Kevin, Patrick’s son, forced his way in and tackled Davis. The son allegedly held Davis on the floor while Patrick hit him with what was described as a table leg with lead at the end of it. Patrick told deputies he meant to hit the victim on the arm or shoulder to bruise him, instead Davis was struck in the head. The next day the weapon was thrown into the Big Sandy River and both men say they did it.  Kevin Davis has been charged with accessory after-the-fact (murder) and burglary. He has pled guilty to the burglary charge.

Patrick Cyrus remains at the WRJ on what appears as no bond.

(A GRAND JURY CHARGE IS NOT PROOF OF GUILT OR INNOCENCE)