The Pig Advocate League said there is a Sept. 14 deadline, then the pigs will be slaughtered 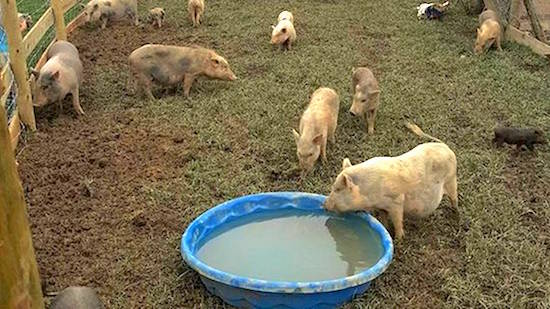 Most of the pigs at a farm in Falmouth were malnourished and some were pregnant. Some media reported that the state Fish & Wildlife Agency took control of the pigs and enlisted established rescue organizations to look after and prepare the animals for adoption.

The Pig Advocate League said there is a Sept. 14 deadline for the pigs to get veterinary care and be placed in new homes or else they will be euthanized.

The group said in a Facebook post there has “never been a more desperate time in the pig community.”

“It’s a lot of work. Before they can be moved, the state requires they have health checks, micro-chipped, etc. A lot of that is what we’re doing this week,” Josh Carpenter Costner, director at Cotton Branch Farm Animal Sanctuary in South Carolina, told Fox 19. Some Cotton Branch representatives arrived on site over the last few days to help with the work, according to the group’s social media posts.

Lori Tristan, the farm owner, was charged in July with more than 100 misdemeanor counts of pigs not properly fenced. The 119 pigs were running loose and additional pigs were in makeshift pens, her citation showed. She told some outlets she was trying to provide a rescue effort that quickly got beyond her abilities to control it.

She told Local 12 she needed help.

“It’s a lot of work. It’s a lot more than I thought it was going to be,” she told the news station.

“I take responsibility. I just want them to go to rescues and good homes,” Tristan later added.

Local sanctuary Atti’s Acres is providing food for the pigs and has set up fencing at the farm to separate genders, according to the Pig Advocate League. The number of pigs has grown above 458 due to “out-of-control breeding,” the organization stated.

PAL has called the mission to vaccinate the pigs and find them homes “Operation 458.” Those willing to adopt have been asked to submit applications and the response has been significant, according to the volunteers working directly with the pigs.

The cost to care for the pigs was about $40,000 and the Pig Advocates League said Tuesday morning that more than $33,000 has been donated. Donations can be made at pigadvocates.com/donations. Adoption and foster applications can be found here. There is a need for volunteers to transport the animals with sign-ups here. With this form, volunteers can offer their services to help save the pigs.