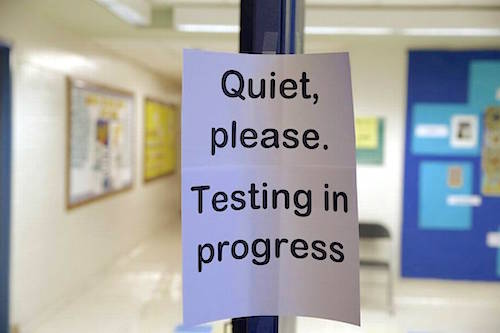 The Floyd County Schools District earned numerous accolades for achievements on state tests, including multiple “District of Distinction” honors, and in 2016, a ranking of sixth statewide, but a scathing audit suggests that some in the district may have been more concerned with test results than the quality of education provided to students.

The Kentucky Department of Education required the school district to implement a corrective action plan this year, following an audit of the district’s services for children with special needs.

It uncovered numerous violations of state regulations concerning special needs education, and it also uncovered “inappropriate state assessment practices” and other concerns that impacted students of all abilities throughout the district.

“Assessment tools and strategies applied by the district were not used for determining the educational needs of students,” the audit said. “Rather, special education was sought as a substitute for appropriate instruction so that accommodations could be used during statewide testing in the district.”

KDE found, according to the audit, that the district encouraged parents of kindergarteners with “challenging behaviors” to withdraw their children from school, retained kindergarten students through the second grade “based on academic performance,” asked teachers to sign students up for special education services in time for the state assessment, placed kids with behavior problems on home or hospital instruction, and placed disabled students in alternative education settings where they didn’t even have a teacher.

The audit covers the review of data and documents from 2014 through 2016, when the district was under the leadership of former Superintendent Dr. Henry Webb, who resigned last June. Webb told the Chronicle and Times this week that the claims in the audit are “utterly ridiculous and false.” The audit also looks at the 2017-2018 school year, when the district came under the leadership of former Interim Superintendent Steve Trimble.

This audit began after parents and local agencies alleged the district was failing to comply with the Individual with Disabilities Education Act (IDEA).

The complaints included allegations that special education services were not provided in some of the district’s facilities, the decisions to place students in special education programs were not made in compliance with laws, and, among other things, that the district was “over-identifying students” with special needs so they can re-ceive accommodations on state tests.

According to the documents obtained by the Chronicle and Times, KDE officials visited the school district, starting the audit in January, and an anonymous letter that alleged “fraudulent practices” prompted a return visit in February.

Through this audit, the KDE staff substantiated “systemic findings of noncompliance” under the federal disabilities act, as well as dozens of violations of state regulations.

Several findings were referred to other departments for further examination, including one in which the KDE learned that some disabled students were being taught “solely” from a computer program, without certified teachers to help them.

That concern was forwarded to the Office of Educational Accountability for “further examination.” That office, established by the legislature, monitors the state’s public education system and investigates allegations of wrongdoing.

Allegations about the condition of the Renaissance Learning Center building in Martin were also forwarded to the state’s Office of Continuous Improvement and Support.

Under state law, there are many accommodations given to special needs students during state tests, and they’re based on the specific needs of each student. Accommodations can include giving a student more time to finish a test, providing someone who reads the questions and answers to the student, or having a scribe — an adult who fills in the answers for a student.

In the audit, the KDE reports that the district violated state regulations that specify how and why students are referred to special education.

“The purpose of the inappropriate evaluation practices was to qualify students for accommodations so students can receive accommodations through an IEP (Individual Learning Plan) for state assessments, even though the students may not be truly eligible for IDEA services,” the audit says.

Repeatedly, the district is cited in the audit for enrolling students in special education programs or alternative learning classrooms without following the appropriate process.

KDE, according to the audit, found evidence to show that the district used an “extended year” system to retain kindergarteners through second grade, based on “academic performance.” The state starts testing students in the third grade.

“At least one school turned in a ‘stack of about 50 referrals’ to the district office at one time in an effort to identify students for special education before the K-Prep assessment window,” the audit says.

KDE found additional areas of concern during this review of FCSD’s special needs services, including issues with the placement of students on home/hospital instruction and in alternative learning programs.

The KDE found that the district violated state regulations by failing to ensure that disabled students are educated with students who are not disabled “to the maximum extent possible.”

Findings suggests that Floyd County schools used home/hospital instruction as “as a tool to remove students with behavior concerns” and to deal with “students with needs that were too difficult to serve” in schools.

It notes that students are “entitled to compensatory education to replace the services the district was obligated to provide.”

The alternative education portion of the audit highlighted concerns found at the Renaissance Learning Center in Martin and two alternative programs, offered in partnership with Mountain Comprehensive Care Center: the SIGHTS program, a school-based day treatment program for children with “serious emotional disturbance” and the Rising Point Treatment Facility, a residential treatment facility that offers a structured psychiatric program for teenaged boys with ”severe emotional disturbance.”

Detailing numerous violations, the audit describes a systemic lack of education for students in these programs.

It suggests that the district placed students in SIGHTS for years, when it was only supposed to last three to four weeks, and that students were placed in SIGHTS “due to the lack of full resource settings available in the district.”

According to the audit, students enrolled in SIGHTS at various schools and students residing at Rising Point, do not actually have teachers. A computer-based learning program is the “only method used to provide instruction” for them, it said.

“No direct instruction was observed or reported,” it said.

It also noted that KDE staff “discovered noncertified staff supervise and instruct students who are placed in alternative programs and alternate facilities within the district.”

“There are situations where there is no involvement or oversight of certified staff for the delivery of instruction to students,” the audit said.

MCCC called a private school to teach students living at Rising Point, the audit points out, after FCSD “failed to respond” to requests to provide teachers.

It also cites the district for failing to give end of course exams, ACT tests or the state assessments to Rising Point students, “despite being eligible and required to do so.”

Rising Point students were not receiving credit because the district didn’t get the computer program it uses to teach them approved, the audit said.

“Students at Rising Point are not at traditional high schools. Because they used a computer program which was not approved for use at Rising Point, even though the district intended to provide them credit in this way, they cannot be awarded credits in this manner based on Floyd district policy,” the audit states.

Former FCSD Superintendent Dr. Henry Webb called allegations that the district used special education as a substitute for real education so that students could get accommodations on state tests “ridiculous.”

AN ALTERNATIVE TO PROPPING UP COAL POWER PLANTS: RETRAIN WORKERS FOR SOLAR