PROBLEMS ATTRIBUTED TO ADDED PENSION BENEFITS OVER THE YEARS 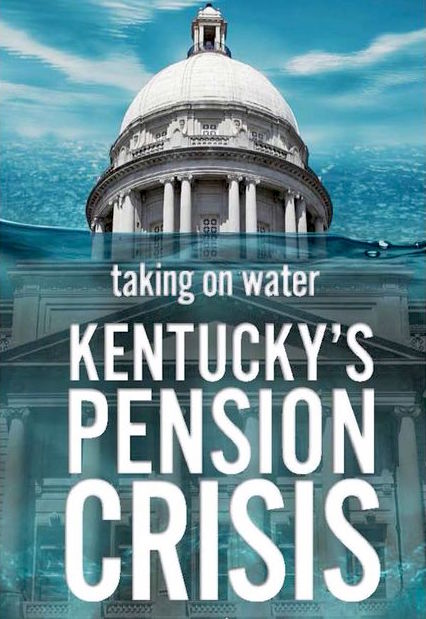 The Bluegrass Institute, a group that describes itself as a “free-market think tank,” released a report Tuesday morning that attributes much of the state’s public pension crisis to the benefits the plans allotted to state employees and teachers over the years, such as making increases in benefit levels retroactive.

The report, “Pension Shock: How Did We Get Here?” is on the Bluegrass Institute’s website, www.bipps.org. The Bluegrass Institute says it is “dedicated to moving Kentucky from dependence to prosperity by offering sound policy solutions grounded in capitalism, individual liberty, personal responsibility and government transparency.”

A Franklin Circuit judge ruled previously the way lawmakers passed Senate Bill 151, which was introduced and passed in both chambers of the General Assembly with only GOP support, was unconstitutional. The pension language was added to Senate Bill 151 after Senate Bill 1 stalled in the Senate without being called for a vote.

“We’ve heard before some policy makers want to discount the whole, ‘how did we get here’ discussion,” Bluegrass Institute president and CEO Jim Waters said in a morning teleconference with reporters. But the issue is important because of the Supreme Court case, and because Gov. Matt Bevin recently announced he will run for re-election in 2019, citing “unfinished business, and keeping our foot on the gas,” Waters said.

Bluegrass Institute Chairman Aaron Ammerman said the organization is supportive of Senate Bill 151. “It doesn’t completely fix everything, but it does take a bite out of the apple,” Ammerman said.

Others have argued the pension systems were underfunded by the state. Standard & Poor’s downgraded the state’s credit rated in 2015, citing “our view of Kentucky’s substantially underfunded pension liabilities that are the result of chronic underfunding,” according to Insider Louisville. Moody’s also downgraded the state’s credit rating in 2017, saying the state wasn’t generating enough revenue to fund the pension systems.

The Bluegrass Institute report cites Senate Bill 142, a bill passed by lawmakers in 1998, with contributing to the “rapid decline” in KERS funding levels in recent years. That bill raised the benefit factor for workers in non-hazardous job from 1.97 percent to 2 percent, made the increase retroactive “to all years of service” and “left in place an expectation that benefit accrual rates would never fall below 2 percent” the report says.

Other changes in benefits that have harmed the pension systems, according to the report, include changing the calculation so that a person’s pension payment is based on their three highest salary years, as opposed to their five highest years.

The report says cost of living adjustments, including equipment allowances in pension calculations and pension “spiking,” where workers “colluded with employers to get double-digit raises during their final year of work in order to drive up retirement compensation,” have also contributed.

“One of the first things we realized was there wasn’t a lot of transparency,” Bowen said. “There wasn’t the ability for the General Assembly … to even get the information to make competent decisions.”

That led to Senate Bill 2, a transparency bill, which needs amending in a future session, Bowen said. Bowen is retiring at the end of this year.

“There’s a plethora of reasons why we are where we are,” Bowen said. Some would argue the problem with the systems “isn’t one of under-funding, but more of over-promising” benefits, Bowen said.

The Public Pension Oversight Board will make recommendations at the end of the year that will be the basis for pension bills in the 2019 session, Bowen said.

Part of the issue, Bowen said, is that lawmakers have to take a lot of political heat when they recommend pension changes.

“It take s a lot of backbone … when you know you’re risking 5,000 teachers yelling at you as you walk from the Capital to the (Capital) Annex,” Bowen said. “The political will to do that isn’t harbored” by all of the members of the legislature, Bowen said.

When asked if legislators would reduce benefits to existing employees, Bowen said, “we were going to reduce the COLA for teachers, and that, for lack of a better terms, is a bloody battle.

“You don’t have public sentiment on your side,” when you try to change benefits, Bowen said.