RICHMOND, Ky. – They come from all over the country for the rock climbing, the hiking and, of course, the rugged, breathtaking scenery. But visitors to Kentucky’s Red River Gorge sometimes encounter copperhead snakes when they interact with the environment. 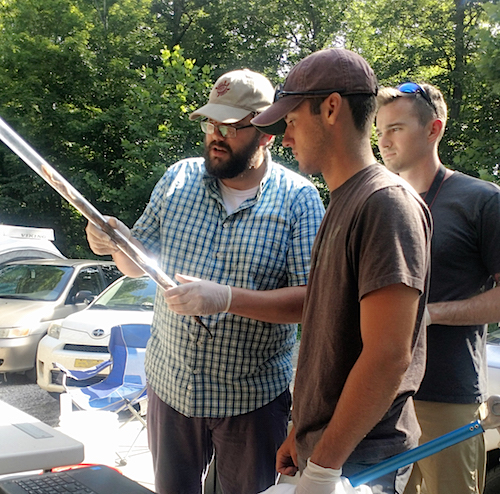 Funded primarily by grants from the U.S. Forest Service and the National Science Foundation Research Experience for Undergraduates, a team of Eastern Kentucky University faculty and undergraduate and graduate student researchers is hoping their work will ultimately minimize human-copperhead interaction.

Copperheads are fairly common eastern Kentucky, including the Gorge, because of the expansive mixed forest and opening habitat and because of the availability of rock crevices and the underground retreats they provide, according to Dr. Stephen Richter, the biology professor who’s heading up a joint effort that involves EKU, the U.S. Forest Service, the Kentucky Department of Fish and Wildlife Resources and the Louisville Zoo.

The mixed habitat allows the snakes to forage along fallen trees and leaf litter for insects, small mammals, frogs, birds and other prey and use the openings, including rock faces, to warm their body to increase metabolism and movement speed. Because of the many caves, crevices, fallen trees and other underground retreats, there is no limitation of places for them to hibernate, eat and breed.

Although copperheads are common throughout much of the Commonwealth, EKU focused its research on the Gorge because of its popularity and the increased likelihood of snake-human interaction.

“It is not possible to completely remove the interaction,” Richter acknowledged. “After all, we choose to recreate in areas with copperheads. But we can work to lessen it by managing recreation areas differently so they are not as attractive to copperheads. Another benefit is through public education, which we do throughout the summer at our study areas. The students advertise their expertise with fliers, and campers and hikers stop by our camper to ask questions. We plan to expand outreach and education the next several years.”

Typically, questions revolve around how to minimize risk and how best to respond if bitten.

“Visitors to the Gorge should be careful when hiking and camping and be vigilant where they sit, walk and put their hands and feet,” Richter said. “Do not step over downed logs or put your hands over or under them without looking on either side. Wear closed-toed shoes, especially at night when walking around camping areas and in the woods. And always use a flashlight to see where you are stepping, even if the moonlight is bright. The most important tip, which is one many people ignore and why so many get bitten, is to leave snakes alone. If you see a snake, do not attempt to move, capture or otherwise get close to it.”

But if you do suffer a bite?

“The most important thing is to stay calm and call 911,” Richter said. “The bitten area should be kept at the same level or higher than the heart, and any tight jewelry or clothing should be loosened or removed in case of swelling. Outdated techniques that should not be applied include use of ice, tourniquet or cutting the bitten area. Once at a hospital that treats venomous snakebites, doctors will monitor vitals and swelling and decide whether administration of antivenom is necessary.”

Copperhead bites are rarely fatal if treated. In fact, an individual is nine times more likely to die from a lighting strike than a venomous snakebite in the U.S., where on average there are only five or six fatal snake bites per year. Also, copperhead venom potency is rather low, and they often employ a “warning bite” by injecting a relatively small amount of venom or none at all. “Dry bites” with no venom are somewhat common with copperheads.

A critical part of the EKU team’s work is to measure and tag the copperheads they come across. Once that is done, they are released the following day. The team then attempts to recapture them to learn more about them.

“Our research currently entails surveying for copperheads at night and using radio telemetry to track movements of individual snakes, which we do during the daytime. At night, a field crew walks transects and captures snakes. We then collect body size data, determine the sex, and mark individuals for later identification. By marking individuals, we can learn much more about the population. For example, we can use the capture-recapture data to estimate population size, determine growth rates, and compare behaviors and movement patterns.

“We mark individuals using a technology called passive integrated transponder devices (PIT tags), which are the microchips that veterinarians use to tag dogs and cats for pet owners. Similar to barcode scanners used in retail stores, we have PIT tag readers that can scan the tag from up to a foot away, which allows us to determine the identity of a copperhead without capturing it. We can track snakes remotely from about half a mile away using radio telemetry.”

The team worked with the U.S. Forest Service to coordinate and with the Louisville Zoo to perform the operation to surgically implant the radio transmitters. With that data, the researchers are able to determine how much total space individual snakes use, how far they travel in a day, where they hibernate, feed, and breed, and many other aspects of their ecology.

“Although results of the study are helping us make areas of high human activity less attractive to copperheads, the species will never be completely eliminated from areas with suitable habitat,” U.S. Forest Service District Biologist Christina Wampler said. “Therefore, recreationists should follow a few basic practices to ensure their own safety. Not only can campgrounds and other recreational areas be managed to make them less attractive to snakes, but already a few adjustments have been made based on data from the study.”

It’s notable, too, that snakes do provide some positive benefits, such as rodent control. Some research has even pointed to copperhead venom as helpful in treating cancer.

Muennich is co-mentored by Dr. Michael Bradley from the Department of Recreation and Park Administration. “This aspect of the research seeks to understand how humans perceive copperheads and how they perceive management techniques that lessen the conflict between human recreation and copperhead habitat needs.”

In addition to funding from the U.S. Forest Service and the National Science Foundation, this summer one undergraduate student was funded through the Battelle-EKU Science Scholars Program, and another was supported by an EKU-funded scholarship grant.