“Anytime you can help somebody or an animal that’s in pain, that’s rewarding” 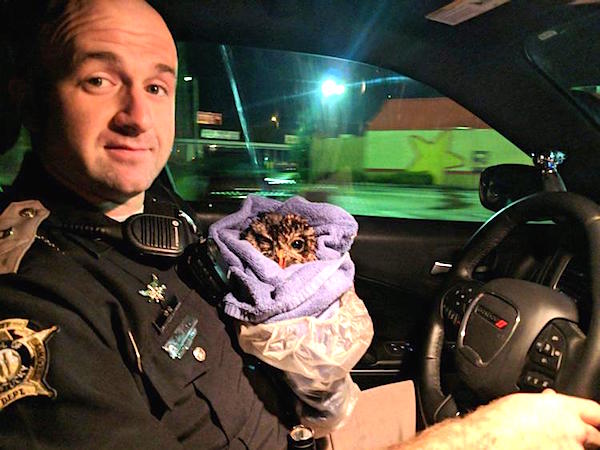 In today’s world, it can be rare to find someone who gives a hoot.

But McCracken County Deputy Trent Hardin showed he did early Tuesday morning, when he stopped to care for a young owl that apparently had been hit by a vehicle on Clark Line Road.

“It was standing in the middle of the road and was obviously hurt,” Hardin said. “It had a little blood on its beak. Initially, I passed it. But I backed up when I realized what it was. I tried shining my light on it to see if it would acknowledge that, but at that point, both of its eyes were closed.”

When he got out of his vehicle to approach the owl, Hardin said it was clear that it was severely injured. After contacting dispatch, the sheriff’s department was able to get in touch with a wildlife rehabilitation specialist from Marshall County.

Wrapping the owl in a towel, Hardin drove to meet the specialist, who told him that the bird was suffering from a concussion and might not be able to survive the night.

But as of late Tuesday afternoon, Hardin said, the owl was still alive.

“Anytime you can help somebody or an animal that’s in pain, that’s rewarding,” Hardin said. “This definitely proved that law enforcement is unique, and you never know what you’re going to get into.”

Sheriff Matt Carter said he is thankful to have such a committed group of men and women working at the sheriff’s office who take what they do seriously.

“Law enforcement is definitely a calling,” Carter said. “Those who have answered that call did so because they have a genuine concern and care for people in their community. They want to do the right thing and what’s best in all situations.”

Although he has seen plenty of negative publicity surrounding law enforcement nationally, Carter said he is honored to lead an agency with men and women who are in the line of duty for the right reasons.

“They are striving every day to try and make a difference,” Carter said. “I think instances like this are proof of that. Some may view it as going above and beyond, but I know without a doubt that any one of our deputies would have done the same thing. They were doing what they knew was right. That’s why they do what they do.”

By Emily Williams
The Paducah Sun

TEACHERS IN KENTUCKY NO LONGER HAVE TO OBTAIN MASTER'S DEGREE