The birth is such big news because mules can’t give birth; or so the experts say…

She stands just 18 inches tall and weighs 21 pounds, but a tiny new arrival is making big news on the farm of Jerry and Teresa Smothers near Perryville. 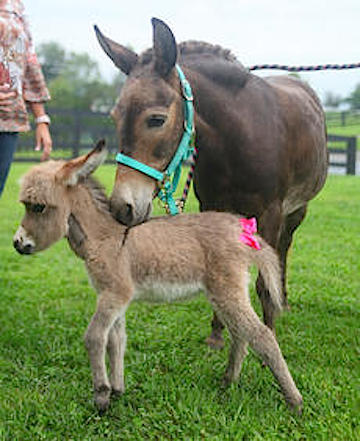 Peanut, a miniature mule, gave birth to a baby on July 31. The birth is such big news because mules can’t give birth; or at least that’s what the experts say.

“We bought Peanut from a local veterinarian, Dr. Ross, 17 years ago, and he told us she would never be able to have babies,” said Jerry. He explained that mules have an odd number of chromosomes and therefore cannot reproduce.

“To get a mule, you take a male donkey and breed it to a mare horse,” he said. “We’ve had Peanut for 17 years, and she’s ran with stud horses and stud ponies, and she’s run with these donkeys for two years, and never anything. After this happened, I’ve researched on the internet, and what we’ve found is that this is like a million to one odds that a mule can have a baby. I read that there have been maybe five cases documented in the last 200 years, so it’s pretty rare.”

Jerry and Teresa learned of the new baby from a neighbor and friend, Sam Beck. When Jerry got a call from Beck telling him he had found the baby, he was in disbelief.

“Peanut was out in the field, running with Sam’s cows and donkeys. He called me and said your mule has had a baby,” Jerry recalled. “I said mules can’t have babies, and Sam said, ‘You should have told her that before she got pregnant.’”

The father of the baby is a donkey belonging to Beck, according to Jerry.

The news about the birth was so surprising, the baby has been named Miracle, and the health struggles she has faced over the past few weeks have helped make that name even more appropriate.

Jerry said the baby struggled early, and Beck made a trip to Tractor Supply to buy colostrum, an artificial mothers milk, because Peanut was not initially producing milk for her baby.

“She really liked it, and she took off and did good, but a couple of days later, she couldn’t digest it. A vet came out and said her blood work was bad, and if we wanted to save her, ne needed to take her to an equine hospital,” Jerry explained.

That’s when Miracle was taken to Park Equine Hospital in Versailles. She spent a week there, being doctored back to health. Jerry said her diet is limited to just 25 milliliters at a time due to her extremely small size. That means she was eating less than an ounce per feeding.

“A 16-ounce bottle is 500 milliliters, so that shows you she can just eat a little bit at a time, but she needs to eat real often. We’ve been doing around-the-clock feedings, and our neighbors have helped us, too,” Jerry said, adding that Beck has been a huge help in the process.

During her time at Park Equine Hospital, Jerry said veterinarians from the University of Kentucky were very interested in Miracle, and they are doing tests to validate the miracle birth, including DNA tests that will verify that Peanut is in fact a mule that gave birth. Jerry said they aren’t sure what to call Miracle, since her mother is a mule and her father is a donkey.

On Monday afternoon, Teresa said they had received word from UK officials that verifies Peanut is in fact the mother of Miracle. She said UK has also requested to test hair from two additional female donkeys that were in the field with the animals. UK representatives said the additional tests are simply to have results on record that the other two female donkeys are not the mother, and to remove any doubt, should anyone question the extremely rare birth.

By Jeff Moreland
The Springfield Sun