SUPPORTERS ‘REVVING UP’ FOR NOVEMBER CAMPAIGN 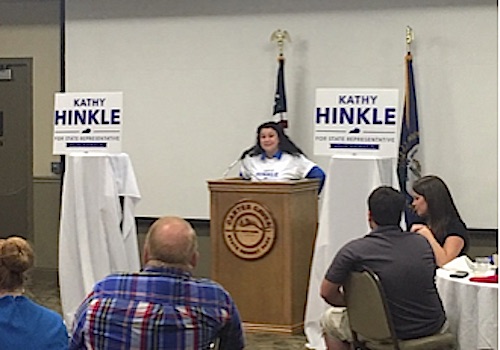 The seat, which represents Carter and Lawrence Counties is currently held by incumbent Jill York from Grayson but her ‘yes’ vote in support of Pension Bill 151 to allow it go to through to the house for a full vote has left her vulnerable in November.

At the event this week Hinkle, a local Lawrence County native cast her vision for the 96th District with the help of some of the state’s biggest political stars. 94th District Representative, Angie Hatton, former Governor Paul Patton, and Ky House Floor Leader Rocky Adkins all spoke in favor of Hinkle’s candidacy.

Hatton, who represents Letcher and parts of Pike County, told the crowd of nearly 100 “if the person representing you is not saying what you would say, it’s time to get them out”. 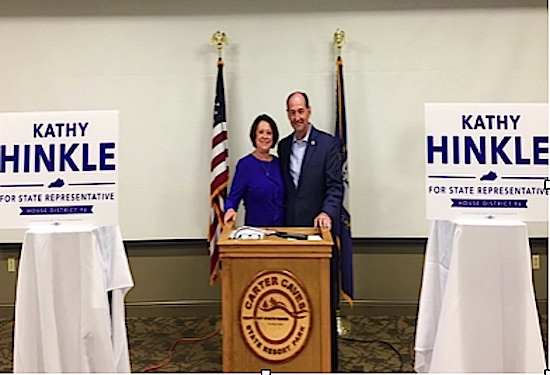 Rocky Adkins, who once represented Lawrence County, told the audience “the same agenda that you’ve seen over the last year or more will continue unless we make a change. Kathy will help us make that change.” He went on to say, “We need a voice and a new direction for the 96th district and to get that we need Kathy Hinkle in that seat!”

Hinkle was also endorsed by Friends of Labor, a group of labor workers from across Kentucky who oppose Governor Bevins Right to Work law. Adam Bush, who represented Friends of Labor at the event, said “Kathy is the most professional and smart candidate I’ve ever met and she’s going to stand with the working people of this district.” 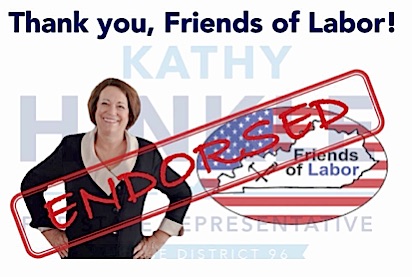 Hinkle told the crowd she plans to be their voice in Frankfort.

“I vow to be your voice, to be your supporter, and to always vote in the best interest of public education. If only a handful of representatives, ours included, would have voted differently, Matt Bevin’s pension bill –  no, sewer bill – would have never even made it to the floor for a vote.”

“As your State Representative, I will be on the forefront of moving our district to the front lines of economic development. This begins by repealing Right to Work legislation that has crippled Kentucky’s ability to attract, retain and sustain viable labor opportunities. “

Hinkle’s campaign is gaining momentum with each passing day and with just 12 weeks until the election she is poised to make a run at a seat that’s not been held by a Lawrence County native in many, many years.

paid for by Kathy Hinkle for State Representative