Gov. Matt Bevin on Tuesday compared opponents of pension reform to “drowning victims” who are “pulling you under.” 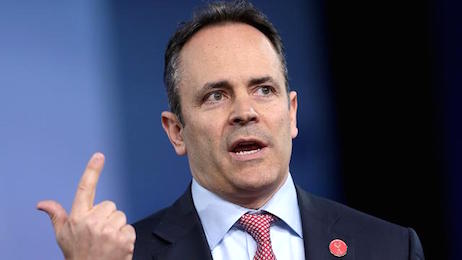 Bevin made his comments on 55 KRC, a talk radio program based out of Cincinnati, during an interview with host Brian Thomas. The Kentucky Republican said no one appreciates the work he is doing to save the commonwealth’s insolvent pension system.

The Senate Democratic Caucus Leadership in a statement responded by calling the governor’s “disdain” toward this group as “disturbing and unnecessary.”

“Once again our Governor has taken to the state’s airwaves in an effort to disparage current and former Kentucky public educators, first responders and public employees,” state Sens. Ray S. Jones II, Dorsey Ridley and Dennis Parrett said in a statement.

“Now he is drawing comparisons of these groups to a drowning victim, in reference to the pension systems. The disdain displayed by the Governor towards these groups time and time again is disturbing and unnecessary. These individuals are public servants working in the betterment of all Kentuckians and most importantly Kentucky’s children.”

Ben Self, the chairman of the Kentucky Democrats, quickly fired back at Bevin in a statement.

“It is offensive for Governor Bevin to suggest that teachers, police officers, and public employees can’t think for themselves or make informed decisions about their own future,” Self said.

Bevin is locked in a legal battle over the legislature’s surprise pension law that lawmakers passed during the last day of the 2018 legislative session, a move that brought educators out in force against Bevin and the state’s Republicans.

Last week, Bevin appealed the June ruling that struck down the pension reform law, arguing that the law is needed to save the state’s badly funded pension system.

The law puts teachers hired after Jan. 1, 2019, into a new “hybrid cash balance” retirement plan rather than the traditional pension plan with defined benefits. It also raises the retirement eligibility age for future teachers.

Additionally, it makes a few cuts in benefits for current public employees, like capping the use of sick leave in calculating retirement benefits to the amount of sick leave a teacher has accrued as of Dec. 31, 2018.

Kentucky’s public pension plans have a combined debt of more than $43 billion, which the Bevin administration says is among the worst-funded in America.

This isn’t the first time that Bevin has called out opponents to the pension reform bill.

In March, Bevin said in an interview with a Bowling Green radio station that state lawmakers are facing a “thug mentality” from pension reformers.

In April, at the height of teacher protests in Frankfort, Bevin told reporters that children were sexually assaulted or ingested poison because educators came to Frankfort to advocate for reform.

“I guarantee you somewhere in Kentucky today, a child was sexually assaulted that was left at home because there was nobody there to watch them,” Bevin said at the time. “I guarantee you somewhere today, a child was physically harmed or ingested poison because they were left alone because a single parent didn’t have any money to take care of them.”

A spokeswoman for Bevin did not immediately return a request for comment left by phone and email at 11 a.m.