Skaggs, Ramey to square off in Blaine BOE race 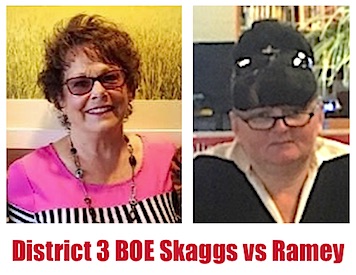 Lawrence Clerk Chris Jobe said two more candidates had signed up to run in the November election by closing time today leaving only one day (Tuesday) for candidates to register.

FRANKFORT, Ky. (August 13, 2018) – Independent candidates and other political organization or group candidates who wish to seek certain offices on the General Election ballot in November must file no later than Tuesday, Secretary of State Alison Lundergan Grimes said Monday. Those candidates must file their petitions of nomination and pay a filing fee to appropriate filing officials no later than Aug. 14, 4 p.m. local time.

Law requires that most independent, political organization or group candidates for most offices, except federal offices, must have filed a statement of candidacy form no later than April 2, 2018, to be qualified.

The Aug. 14 filing deadline also applies to candidates for school boards and nonpartisan candidates for city offices in cities that waive the Primary Election.

“The Secretary of State’s office is always ready to assist potential candidates with questions they may have,” said Grimes. “Voting is not the only way to participate in our democracy – running for office is another great way to make your voice heard.”

Following the Aug. 14 filing deadline, public drawings for ballot position will be held in the filing officials’ offices at 2 p.m. local time on Aug. 16.