PREGNANT WOMEN HAVE HIGH RATE OF OPIOID USE

Kentucky had one of the highest rates in the nation of pregnant women using opioids in recent years, providing another example of the state’s struggle with abuse of the painkilling drugs.

The finding was in a report released Friday by the Centers for Disease Control and Prevention, which analyzed data on women hospitalized to deliver babies from 1999 through 2014. 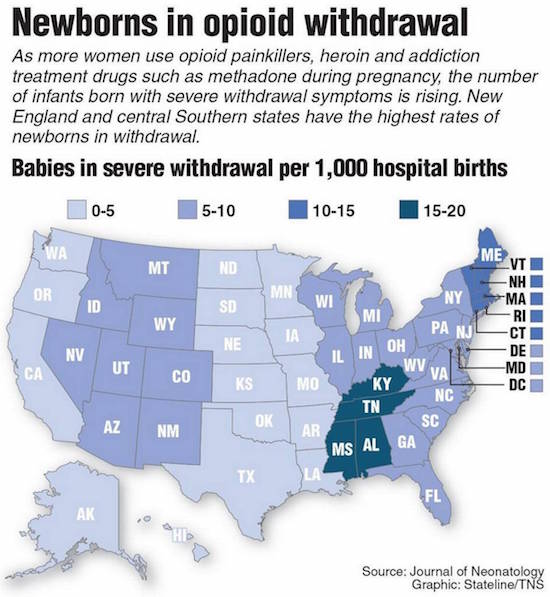 That rate of 19.3 was the third-highest in the country, behind only Vermont at 48.6 and West Virginia at 32.1, the report said.

Information for the analysis was only available from 30 states and the District of Columbia, and some did not have data available for all years.

Kentucky also had one of the highest rates of increase in the country in the rate of opioid use disorder among pregnant women, an average of 1.55 annually.

That was fifth-highest among the 30 states and Washington, D.C. Vermont had the biggest annual average increase, at 5.37.

The agency said the report was the first multi-state analysis of opioid use disorder among delivery hospitalizations.

The agency said that excessive prescribing of opioids and difficulty in getting non-opioid remedies for pain contributed to the rise in abuse of opioids across the country.

Opioids include heroin and some prescription drugs, but the opioid threat growing most rapidly in Kentucky is from fentanyl, which is far more powerful than heroin.

Of the record 1,565 overdose deaths recorded in Kentucky in2017, fentanyl was involved in 52 percent, according to a report from the Kentucky Office of Drug Control Policy.

That was up from 47 percent of overdose fatalities the year before.

There are serious health concerns associated with opioid use by pregnant women, including death, premature labor and the risk that the baby will suffer from neonatal abstinence syndrome, according to the CDC.

Newborns with neonatal abstinence syndrome can have a variety of problems ranging from tremors and irritability to vomiting, fever and excessive weight loss, according to a December 2016 report in the New England Journal of Medicine.

The article said “neonatal withdrawal” is probably a more accurate description of what the newborns go through.

The average hospital stay for infants with the syndrome is 17 days, which is much longer than most babies and drives up health care costs, according to the article.

The Herald-Leader reported in 2017 that the number of babies born with neonatal abstinence syndrome in Kentucky had gone up 375 percent since 2007.

The University of Kentucky started a program called PATHways to deal with the problem, providing expectant mothers with a range of services including group therapy, counseling, education and medication-assisted treatment.

By the spring of 2017, 77 percent of the 150 women who had been through the program had no illicit drugs in their systems when they entered the hospital to give birth, and follow-ups showed the women were less likely to relapse and begin taking drugs again after their baby was born.