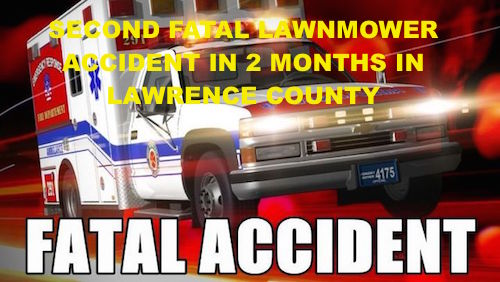 One person is dead in southeastern Lawrence County following a crash involving a lawnmower, the second fatal lawn mower crash in the county this year. Well known Lawrence Co. resident Buck Blankenship, 69, died after a lawnmower accident at the cemetery in Louisa on May 11 of this year.

The victim in Friday’s accident has been identified as Cliston Jude, 67, of the Ullysses area of Lawrence County, acting Lawrence Co. Coroner Jay Hammond said. Hammond said the mower that flipped over and pinned Jude weighed in excess of 1,700 lbs and Edsel’s Wrecker Service had to be called in to pull the machine off Jude.

He was pronounced dead at the scene of asphyxiation.

According to the Lawrence County Emergency Management agency, Lawrence County E-911 received a call around 2 P.M. Friday afternoon that an individual had been in wreck accident on a riding lawnmower on Lost Creek Road just off Kentucky Route 581 in the Lowmansville community.

E-911 dispatchers then contacted the Lowmansville Fire Department and Netcare Ambulance Lawrence County to send them to the accident scene. Shortly thereafter, emergency officials then requested both Cherryville Fire – Rescue and the Louisa Fire Department to respond on a mutual aid call to the wreck site, as well as contacting an aeromedical helicopter unit to be placed on stand by for a possible flight of the patient to a trauma center

Local emergency officials say the victim was a man. He has not been yet identified publicly as of Saturday morning, but officials do know his name, and that most of his immediate family has been contacted about the circumstances.

According to local emergency officials, they stated the man was on a riding mower that went over a hill and that he got too close to an embankment and went over the edge, flipping over into a creek in the process and trapping him underneath.

Not many details are being released right now, but officials said that more information will be released soon, including the identity of deceased, from via the Lawrence County coroner’s office.

Keep returning to the Levisa Lazer for more updates on this tragic accident incident as soon as we get more details.

GROWING UP IN LOUISA...BY MICHAEL COBURN - Influencing others