FAR MIDDLE FORK – A woman and her dog avoided injury, despite nearly going over the Lark Arnett Hill on Wednesday. 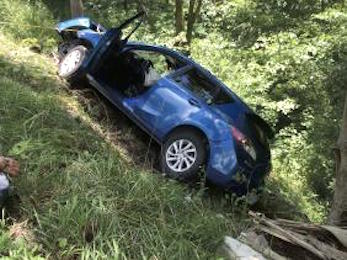 On July 25 crews received a call from a woman traveling over the Lark Arnett Hill, reporting that she had lost control and went over the embankment an estimated 20 feet, when her tire dug into the hill, holding her in place.

She remained in the vehicle until rescue crews arrived. Magoffin County Rescue Squad used two winches to stabilize the vehicle, a rope to hold her door open and another rope tied around her, so when she stepped out couldn’t fall down the hill.

Both the driver and her dog were able to safely exit the vehicle. No injuries were reported.

Magoffin County Rescue Squad Captain Carter Conley said she was extremely lucky that her tire dug into the side of the hill, securing her enough until rescue crews could arrive.