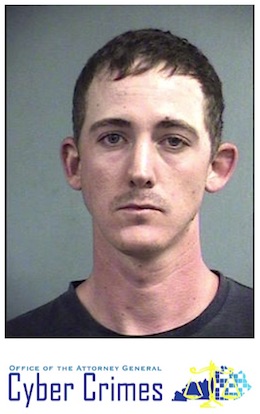 using of a minor in a sexual performance and one count of allegedly seeking sex with a minor.

Eric Clifford Sutherland was arrested July 27 and lodged in Louisville Metro Corrections on a $75,000 full cash bond after Beshear’s cyber investigators issued several search warrants over the course of their investigation.

Beshear’s investigators launched a joint investigation with the United States Department of Homeland Security Investigations (HSI) after the federal agency received an initial complaint via its national reporting system earlier this month from a family in Southern Indiana.

The complaint, routed to the federal agency’s Louisville field office, alleged that the victim, a minor, was solicited for sexual images by a Louisville adult. The solicitation occurred over Instagram and Snapchat applications earlier this year.

Beshear said the suspect was determined to be Sutherland who initially pretended to be a female and sent multiple sexual images and videos to the minor. It’s alleged that Sutherland then threatened to publish images of the victim if the minor did not meet him in person.

During the investigation by Beshear’s cyber investigators, online account records were recovered and showed that Sutherland repeatedly friended juveniles and then immediately asked to receive images from them.

Multiple electronic devices were recovered from Sutherland and from his residence. Several child sex abuse images were located on one of the devices.

“The Internet can be a dangerous place for our children, and nearly every online platform or app can be abused by sexual predators who are looking to exploit them,” Beshear said. “My office is committed to working with law enforcement partners, like in this case with Homeland Security Investigations, to do everything we can to protect children and keep our communities safe.”

Beshear’s office has reached historic levels in stopping child predators with more arrests, charges and convictions than ever before.

The Cyber Crimes Unit is a part of the Kentucky Internet Crimes Against Children Task Force, which works to reduce the number of child predators going after Kentucky’s children.

The unit works with other state, local and federal partners, like HSI, to ensure child predators are caught quickly. With some of the most advanced technology in the Commonwealth, the unit is a valuable resource to law enforcement agencies in Kentucky.

Beshear said with the ever-changing cyber landscape, the unit is dedicated to educating its detectives on the most current techniques and technologies to keep pace with those seeking to harm our children.

Beshear said that Kentuckians have a moral and legal duty to report any instance of child abuse to local law enforcement or to Kentucky’s Child Abuse hotline at 877-597-2331 or 877-KYSAFE1.

"BACK TO SCHOOL BIKE BASH" SPONSORED BY TRAIL TOWN AUGUST 5