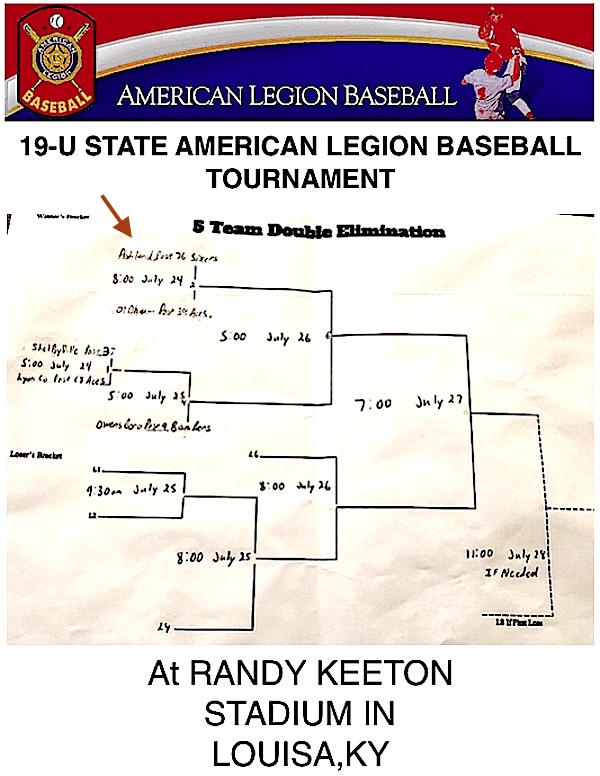 The Sixers will join 4 other post teams looking to make a trip to the Southeast regional tournament in Asheboro, North Carolina beginning August 8th.

Ashland Post 76 will begin play tonight at 8:00 vs Oldham Post 39 Aces with Lawrence Co. hurler CJ Fairchild on the mound. Bulldogs Jackson Feltner will be at first base, Tyler Maynard at shortstop and Austin Rowe behind the plate.

Admission for each day will be $5.00 with 12 under admitted free. Concessions will be sold during the tournament.

“…We are excited to showcase our facilities to the American Legion teams around the state and are thankful to the Ashland Post staff for taking care of our kids the past two summers. Weather permitting it should be an exciting week of baseball and hopefully our fans will come out and support the local players.”

“… (We have) Great kids and great competitors. Love them. CJ Fairchild is our shortstop and top pitcher, Jackson Feltner is our first baseman and 3 hole hitter, Austin Rowe is one of our two catchers and hits with a high average for us and Tyler Maynard is our utility guy who most likely will play shortstop when C J pitches Tuesday night. He was gone for most of June playing summer basketball so he is just now getting comfortable. Really good hitter and outstanding glove.”

“ …It is always better to play at home . Much better to sleep in your own bed and eat mom’s cooking. We are thankful to Travis Feltner and Lawrence Co. for allowing us to host the tournament at such an outstanding facility Now let’s hope the weather cooperates.”

“… We have Garret Applegate our lead off hitter from Lewis county sets the table and is one of our arms, Cameron Marushi is our leading home run hitter this summer who is from Ashland and is our second catcher with Austin Rowe. Cameron is our clean up guy, Justin manning is one of our top arms and will most likely go in game two for us He is a senior to be at Russell. Richie Hall another senior to be at Ashland is one of our top RBI guys this summer, we also have Collier Wireman from Greenup Co.”

“… We have had a great season so far and have been competitive in every tournament we have played . Couldn’t be more proud of these young men. It is hard to play this many games all over the area from lexington to Columbus to Chillicothe. We have had a successful summer regardless of what happens this week but we are looking forward to more good things this week.”

(Thelevisalazer.com received this information this morning.)