GRIMES SAYS SHE IS ‘WORKING EVERY DAY’ TO PROTECT KY ELECTIONS FROM REDS: HALF OF STATE’S GOP LEADERS ‘JUMP TRUMP’ OVER HELSINKI REMARKS

“…Today, President Trump, refusing to stand up for his own country, accepted Russia’s denial of its continuing attempts to influence and interfere in American elections. In an unprecedented bow to our adversary on foreign soil, the President ignored the facts our own intelligence agencies continue to affirm. 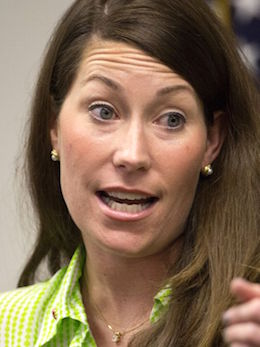 Kentuckians should rest assured that, as the Commonwealth’s chief election official, the security of our elections is my utmost priority and election officials are taking action every single day to protect the integrity of the vote.

Our partners include law enforcement from the local to the federal level, including a partnership with the Department of Homeland Security. Working together, we are vigilant against all threats – foreign or domestic – and especially from Russia…”

“Today’s indictments confirm again what all of our intelligence agencies have told us: the Russian government has made vast and varied attempts to influence and interfere with our American elections. These indictments also reinforce the fact that the work of our nation’s Secretaries of State is vital to the security of the U.S. election system.

“As Kentucky’s chief election official, I stand by the results of Kentucky’s election in 2016, but we must hold accountable any actor – foreign or domestic – who have sought or seeks to disrupt our democracy in any way. Kentucky has recently obtained federal funds for further election protections and equipment upgrades. Kentucky must soon move completely to paper-backed equipment to further ensure voter confidence.”

‘THE RUSSIANS ARE NOT OUR FRIENDS’:

Senate Majority Leader Mitch McConnell and several other Kentucky representatives said they agree that Russia interfered in the 2016 presidential election, breaking with Donald Trump’s comments after his friendly meeting with Vladimir Putin.

“As I’ve said repeatedly, the Russians are not our friends and I entirely agree with the assessment of our intelligence community,” McConnell said in a statement to the Courier Journal on Monday.

Trump received immediate backlash from politicians on both sides of the aisle when he met with Russian President Putin. During the meeting, he accepted Putin’s claim that the Russians did not interfere, contradicting the U.S. intelligence community’s research.

“The role of the Intelligence Community is to provide the best information and fact-based assessments possible for the President and policymakers,” Director of National Intelligence Dan Coats said in a statement to USA TODAY. “We have been clear in our assessments of Russian meddling in the 2016 election and their ongoing, pervasive efforts to undermine our democracy, and we will continue to provide unvarnished and objective intelligence in support of our national security.”

House Speaker Paul Ryan, a Wisconsin Republican, quickly chimed in, adding that “the president must appreciate that Russia is not our ally … There is no moral equivalence between the United States and Russia, which remains hostile to our most basic values and ideals.”

Kentucky’s delegation in the House of Representatives, which consists of five Republicans and one Democrat, was split on the matter.

Rep. John Yarmuth, the lone Democrat from Louisville, said he believes Russia unequivocally meddled with the 2016 election, according to spokesman Chris Schuler.

“President Trump showed the free world today that they cannot rely on the U.S. as an ally because Vladimir Putin now calls the shots,” Yarmuth said in a statement. “This is a disgraceful chapter in American history and proof that U.S. interests are not even a factor in the decision making of this president.”

Rep. Andy Barr, from Kentucky’s 6th District, had “been in meetings all day” and did not have a chance to respond, according to spokeswoman Jodi Whitaker. Rep. Brett Guthrie and Rep. James Comer did not return a request for comment.

But Rep. Thomas Massie, of Kentucky’s 4th District, and Sen. Rand Paul, the two self-proclaimed libertarians of Kentucky’s delegation, were less critical of Trump’s meeting and welcomed the chance for discussion.

Paul met with business leaders in Louisville on Monday and acknowledged Russian influence in the 2016 election but also praised Trump for opening the door for discussion between the countries.

“I think people who say we shouldn’t talk, I think are wrong. I think we should have conversations,” Paul said Monday. “I don’t expect a great deal to come of this. I think he can bring up that we are annoyed, that we don’t like, that we want them to cease and desist on interfering in our elections.”

Trump’s comments come two days after special counsel Robert Mueller announced 12 indictments against Russian nationals who are accused of trying to hack Democrats emails and computers relating to the 2016 election.

Yarmuth added that he was disgraced at the state of the United States presidency after the summit.

“The President of the United States made his choices clear today in Helsinki,” Yarmuth added. “He chose a murderous dictator over his own intelligence community, propaganda and bullying over a Constitutional free press, his own political aspiration over U.S. election security, and frankly, Russia over America.”