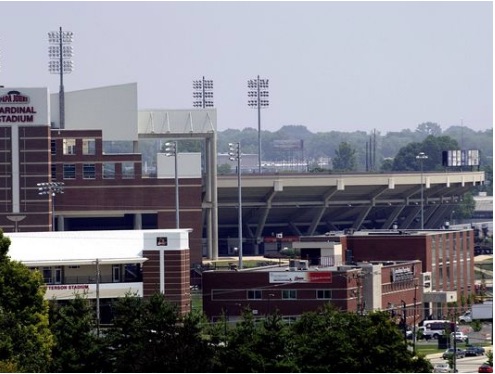 The University of Louisville announced Friday it is changing the name of Papa John’s Cardinal Stadium, two days after news broke that John Schnatter, the company’s founder, used a highly offensive racial slur.

U of L President Neeli Bendapudi said the facility would be called Cardinal Stadium, effective immediately. It was a unilateral decision made by Bendapudi, who said she informed Papa John’s International and Schnatter.

Bendapudi said the university is familiar with the contract and understands what potential consequences there might be. There is no timetable for removing the signage.

On Wednesday, Schnatter apologized for using the N-word after Forbes reported he said it during a conference call in May. That day, he resigned as chairman of the company he founded as well as from the U of L board of trustees.

“These comments were hurtful and unacceptable, and they do not reflect the values of our university,” Bendapudi wrote in a letter sent to the university community. “By taking this action, we renew our community’s commitment to speaking up when it matters, doing what is right, and coming together as one team — our Cardinal family — to heal and move forward. The brightest days for this university are still ahead.”

Contractually, the right to change the name of the stadium belongs to Schnatter himself, the Courier Journal reported Thursday. Bendapudi said Thursday that university officials would evaluate the naming arrangement.

A growing chorus of criticism followed Schnatter’s admission and apology, including tweets from the accounts of football players Jaylen Smith and Seth Dawkins calling for the football stadium to be renamed. Senate Majority Leader Mitch McConnell said Friday that he’d “absolutely” remove the Papa John’s name if he had the power to do it.

Analysts: Papa John’s better off without a key ingredient — the founder 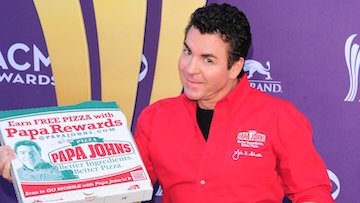 Analysts and brand specialists watching the furor surrounding Papa John’s founder and now ex-chairman John Schnatter say the pizza chain’s fortunes may take a turn for the better without Schnatter in the mix.

His departure provides an opportunity for the Louisville-based company to chart a new course, unshackled from the bonds of a soured relationship with its creator, analysts said.

The markets seemed to agree with that assessment. The company lost $96 million in market value Wednesday, with shares falling to a 52-week low of $48.33, after Forbes reported that Schnatter made a racial slur during a conference call aimed at helping him avoid public relations blunders.l

Schnatter apologized, resigned from the University of Louisville Board of Trustees and as chair of Papa John’s.

On Thursday investors flocked back to the company, with shares closing at $53.67 — nearly $3 higher than before the devastating Forbes story broke.

The pizza maker had 5,199 domestic and international locations last year, and Schnatter received $3.6 million in salary and stock. He owns more than 9 million shares of the outstanding stock, or nearly a third of the company.

It’s been a tough year for the company, which saw its stock drop from a 52-week high of $81.09 early in the year to Wednesday’s low point.

Experts in reputation and brand management predicted that the Louisville-based company faces an uphill battle to regain the trust of its customers and its franchisees, and to rebuild its tarnished image.

Papa John’s said in a statement late Wednesday night that it will appoint a new chairman in the coming weeks. Olivia Kirtley, the board’s lead independent director, will run the board until a permanent replacement is found, it added.

Papa John’s spokesman Peter Collins said in an email that the company had no other comment, other than to confirm that Schnatter will remain on the company’s board.

Schnatter made a serious blunder last November when he blamed slowing sales on the NFL’s handling of black players kneeling during the national anthem, noted Eric Schiffer, chairman of Reputation Management Consultants, a firm that guides Fortune 500 companies and senior leaders through the kind of crisis Papa John’s is now in the midst of.

“This is public relations brand suicide and it’s very serious to spew hate from the founder of the company and the face of the brand. … He has proven to be a dumb mouthpiece,” Schiffer said.

Papa John’s top leaders “are in the bunker now,” working on emergency strategies to repair the company’s relationship with consumers, particularly people of color, Schiffer said.

The company has some work to do to win back African-American customers who are bound to feel insulted by Schnatter’s remarks. It also faces the challenge of reassuring employees that they work in an accepting environment where diversity is celebrated, he said.

The company needs to own the problem and be transparent about how it intends to make things right, Schiffer said, which may include reaching out to leaders in the African-American community to forge new relationships. Scholarship funding and other philanthropic support is one way to do that, but it’s most important to be sincere. It’s a case of “what you do versus what you say.”

Starbucks recently found itself in hot water over its managers’ handling of black customers in one of its Philadelphia shops. That was a problem with local management, in contrast with Schnatter as Papa John’s highly visible spokesman and brand ambassador, which has a far more extensive impact.

Who will be in charge?

Papa John’s reported to federal regulators Thursday that Olivia Kirtley, a veteran board member and lead director, will stand in until a new chairman is selected.

Wall Street analysts agree that with sagging sales, Schnatter’s remarks may put an even bigger drag on the bottom line. Former hedge fund manager and commentator Jim Cramer told CNBC Thursday that Papa John’s has been under-performing compared with Domino’s, and the latest controversy “didn’t help.”

He added that “high-level people in the pizza industry … think this company is falling apart.”

Ties to a Toxic Boss

Craig Buffkin, managing partner at Buffkin/Baker, an executive recruiting agency that specializes in placing C-Suite level executives, said Papa John’s is unique in maintaining such a long connection to the company’s roots.

“You don’t have too many chairmen and founders that continue as the face of the company for as long as he has,” Buffkin said.

Companies often pivot away from their founders and bring in fresh leaders to remain nimble and aggressive, he said.

“The velocity of change right now is incredible,” Buffkin said. “It’s a challenging process for any body walking into the executive offices.”

But while Schnatter is stepping down as chairman, he retains huge influence through his large stake in its stock.

And while the company may be going through difficulty now, it likely will survive the embarrassing incident because “the public has a short memory,” Schiffer said.

ONE TRANSPORTED TO TRMC AFTER REAR ENDER AT GEORGE'S CREEK