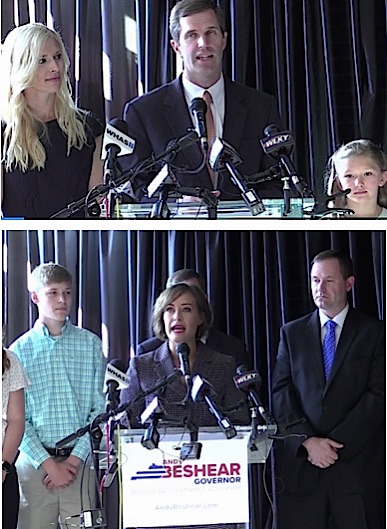 Kentucky Attorney General Andy Beshear announced his candidacy for governor Monday morning, and a Nelson County coach and principal, Jacqueline Coleman, will be his running mate for lieutenant governor.

The announcement of the Democratic ticket, the first in the 2019 governor’s race, was made at 9 a.m. at the African-American Heritage Center in Louisville.

“It’s an honor to be chosen to be lieutenant governor with Andy,” Coleman told The Standard in a phone call Monday afternoon. “Andy has been a fighter for all teachers, she said, especially on the issue of pensions. The two share the same commitment to “support public education” and educators, she said.

The Associated Press reported Sunday, based on a press release, that Beshear would be visiting six cities over a two-day period to make an announcement “concerning the future of Kentucky,” starting with Louisville. After that, they were expected to go to Lexington, Pikeville and Ashland, and on Tuesday, visit Owensboro, Paducah and Bowling Green.

On his campaign website, which was launched Monday, Beshear had profiles of himself and Coleman.

“As Governor, Andy will fight for public education, well-paying jobs, and a state government that is both transparent and inclusive,” the website said.

The Kentucky Standard received texts Sunday night that Coleman had been chosen as Beshear’s running mate, and she confirmed, but it was off the record until the announcement was made this morning.

Coleman lives in Mercer County with her husband, Chris O’Bryan, and is a stepmom to his children Will and Nate, and another child, Emma, whom she coached in basketball, has become a member of their family, she said.

The candidate is an assistant principal and basketball coach at Nelson County High School, a doctoral student in educational leadership at the University of Kentucky and founder, and in 2013, of the educational nonprofit group for college-aged women, Lead Kentucky.

She earned a bachelor’s degree in history from Centre College and a master’s in political science at the University of Louisville.

Her career in education began at Burgin High School in Mercer County, and she taught civics and coached basketball at East Jessamine High School, where she was named Coach of the Year in 2015, before coming to Nelson County.

This is not Coleman’s first foray into state politics. She ran unsuccessfully against 55th District state Rep. Kim King, R-Harrodsburg, in 2014.

Her father, Jack Coleman, represented the seat in the House as a Democrat in the 1990s and later served in the administration of Beshear’s father, Gov. Steve Beshear, as deputy commissioner for buildings and construction. Her mother is Cala Coleman.

According to the campaign website, Coleman’s “leadership abilities were honed through her experience with Emerge Kentucky,” a political leadership training group for women.

Audrey Haydon of Bardstown, who currently chairs the Nelson County Democratic Party and was a candidate for state representative the same year Coleman ran, said she knows her well and that she is “a good friend.”

“I think she’s a great pick for Andy,” Haydon said. “She brings a lot of experience for the ticket that he doesn’t have.”

Haydon said Coleman is an activist on education issues such as teachers’ pensions.

“Who could understand education better?” he asked.

Haydon said Coleman took over as girls’ basketball coach in Nelson County last season and led the team to the Sweet 16.

Her grandfather was a star player at the University of Louisville.

Beshear was elected attorney general in 2015 when Republican Matt Bevin was elected governor and has opposed Bevin on many issues.

His father, the 61st governor of Kentucky, served two terms, ending in 2014. The elder Beshear, who lives in Clark County, also served as state representative, attorney general and lieutenant governor, and ran for governor in 1987 then was elected to the office 20 years later.

By Randy Patrick
The Kentucky Standard