Another suspect runs from police, dives in creek and escapes; Cops catch him later 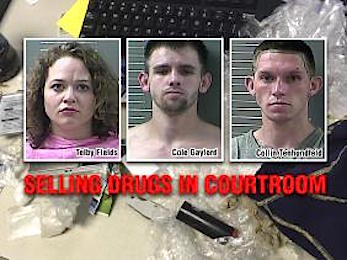 SALYERSVILLE – Three are behind bars now after one woman allegedly tried to sell methamphetamine in a Magoffin County courtroom.

Telby Fields, 24, of Mount Olive, Kentucky, was in court on Monday, July 2, for a scheduled court date in an earlier 2018 case in which she was charged with third-degree terroristic threatening. While sitting in the back waiting for the judge to appear, Fields reportedly asked at least three other people waiting in the courtroom if they would be interested in buying methamphetamine from her.

Adams, followed Fields out of the courthouse, walking around the building to the Church Street side, and witnessed her running down the breezeway that leads to the parking lot behind the courthouse. She reportedly dove into the back of a car parked there and laid down in the back seat.

After talking to the driver, identified as Cole Gaylord, 20 years old of Aurora, Indiana, who acted nervously, Adams asked him and the male sitting in the front passenger seat to step out of the vehicle. Sheriff Carson Montgomery and Kentucky State Police Trooper Haney were standing on the passenger side of the car.

The passenger, later identified as Collin Tenhundfeld, 24 years old of Ohio, tried to run past Montgomery and Haney, but Haney stopped him by his shirt. His shirt then ripped and he was able to maneuver away from the officers, running towards the creek.

According to Adams, Tenhundfeld did a 15-foot swan dive into the shallow creek, eluding police for several hours.

After going through his phone left behind, police were able to identify Tenhunfeld, as well as release pictures of him to the public, which were posted on the Salyersville Independent’s Facebook page. Within less than an hour of the pictures going online, dispatch received calls of a man walking through yards in the East Maple/Back Street area of town.

Salyersville Police Department officers, along with Constable James Rudd, tracked him down on Back Street and apprehended him.

The three were in a car with Indiana license plates, though the plates did not match the car, Sheriff Montgomery told the Independent. Law enforcement found approximately 35 grams of methamphetamine, scales, hundreds of plastic bags, and a BB gun that looked like a real pistol in the car.

They were each taken to the Big Sandy Regional Detention Center, where they remain at press time.

Telby Fields is charged with one count of trafficking in a controlled substance, first degree, first offense, greater than or equal to 2 grams of methamphetamine, as well as two counts of buying or possessing drug paraphernalia.

Tenhundfeld picked up a few more charges, with a total of nine: third-degree criminal trespassing; two counts of second-degree fleeing or evading police (on foot); menacing; two counts of resisting arrest; second-degree disorderly conduct; first-degree trafficking in a controlled substance, first offense (greater than or equal to 2 grams of methamphetamine); and buying or possessing drug paraphernalia.

No court date has been set in either of their cases at press time, though Fields is set for a hearing in her misdemeanor case for July 9. She has another case pending in Campbell County, as well, where she faces charges of first-degree promoting contraband and first-degree possession of a controlled substance, first offense, opiates.