Thapar was born in Detroit to Indian immigrants who were culturally Hindu but not devout, and he grew up in Toledo, Ohio

With U.S. District Court in Ashland, Lawrence Countians are familiar with Thapar 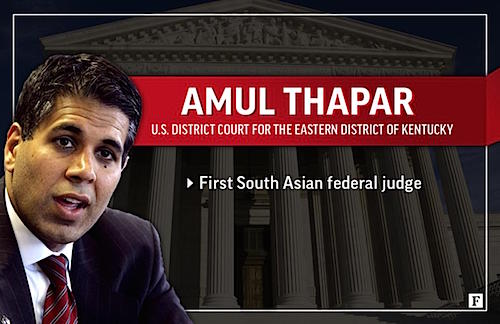 White House officials declined to name which candidates for the seat of retiring Justice Anthony M. Kennedy met with Trump. But multiple outlets, including law blog Above the Law and the Washington Post, named four federal appeals court judges.

In addition to Thapar, who sits on the 6th Circuit Court of Appeals, Trump also reportedly met with judges Amy Coney Barrett of Indiana, Brett Kavanaugh of Maryland and Raymond Kethledge of Michigan.

The White House has said they plan to announce their nominee by early next week.

Thapar, who lives in Covington, has been named among the frontrunners. The Kentuckian was also among those considered for the seat of the late Antonin Scalia, but that went to Neil Gorsuch.

Thapar is a favorite of Senate Majority Leader Mitch McConnell, a fellow Kentuckian, which some have said means he can’t be ruled out of contention for the seat.

“He’s incredibly bright. He’s incredibly thoughtful,” he told the Courier Journal. “He’s a real scholar-judge. And he’s also a charming, personable guy who gets along with people from all walks of life and political persuasions.”

Thapar was born in Detroit to Indian immigrants who were culturally Hindu but not devout, and he grew up in Toledo, his father told the Courier Journal last year.

Trump nominated Thapar last year to his 6th Circuit seat; he was Trump’s first nominee to any federal court. Thapar was a district court judge in Eastern Kentucky.