GROWING UP IN LOUISA… Strike up the Band!

Strike up the Band!

Those words conjure up memories of my band days and even some from a little further back. My mom was quick to take me to parades and any kind of band performances in hopes that music would become part of my life. After all, she had played trumpet in the good ‘ole LHS marching band. I have movies showing her bringing up the rear of formations marching through town. Mom was easy to spot since she was barely five feet, or at least she claimed to be that tall. The uniform hadn’t changed by the time I joined the group. I loved the sharp look and felt I was carrying on a family tradition when I first got mine. I would become the drum major in my senior year, but that wasn’t sought out at all. It ended up that I had little choice in the matter. Besides my bad attitude about the position, I have to confess I enjoyed the role.

I have written before about the ill-fated grade school band that I joined perhaps in the fourth-grade. I didn’t last long because a cousin damaged the loner trumpet. I was essentially fired. It was just as well as the band itself was doomed to fall apart. I think there was a performance, but I really can’t pull up any specific memories about that. 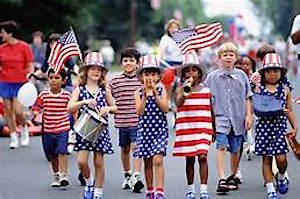 Meanwhile, the streets of our little town enjoyed parade after parade in those times just after WWII. Of course, victory celebrations were the reason for many of them, and I know some of the town’s veterans were strong participants. But really, any excuse was reason enough to form the band up in the street in front of the old ‘normal’ high school building, and blow the whistle that directed them to step off. The band had, after all, spent many hours practicing the music and the marching drills. Some were at band camp, and much more was on the football field behind the school. The group had learned the basics and was led, at least until I took the helm, by talented drum majors. We all enjoyed watching the four majorettes twirl their batons and row after row of musicians following behind. 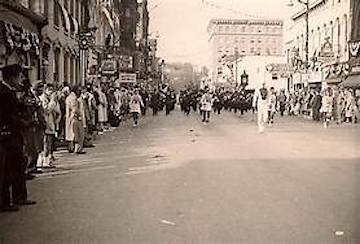 We practiced on the streets, too. An impromptu parade would march all over town on some occasions. I remember once going to little Italy and playing for band director Dick Wilson’s mother. I think we played a hymn ‘Fairest Lord Jesus.’ Try that today, but back then right wasn’t wrong.

My senior year we marched at Morehead State, the ribbon cutting with Happy Chandler for the new river road, now the main road, and also at the governor’s inauguration in Frankfort. (The picture shows me in white uniform, the majorettes and band in Frankfort) The band had grown in numbers to around 100 members by that time. I don’t think we ever marched for July fourth celebrations because school was out. It was summertime!

Time has made me merge memories of parades to the point that I don’t recall which was which. I see people marching in my mind without being able to tie it to a particular event. I know that sometimes we had floats as well as beauty-queens, various clubs, etc. We always drove the town’s old firetruck complete with streamers. The original one (to my memory) was an open-cab truck that still had a crank for starting. That may have been a backup because I think it also had a battery, but I’m not certain. I had seen older firemen use the crank. These firemen wore leather helmets that were replaced by steel ones during my time. The town bought a new firetruck around nineteen fifty. That was the one I would learn to use when I was a high school senior. Several of us attended fire school through the Mayo Clinic and learned to use the pumps, ladders, hoses, etc. 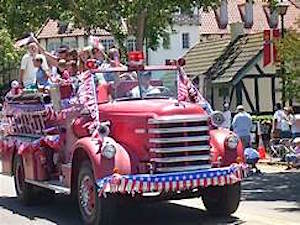 I remember one parade when a replica of the ‘liberty bell,’ was put on a flatbed and driven through town. The replica even had the same crack as the one housed in Philadelphia. Another time I remember some of our veterans on a flatbed truck duplicating the image of the flag raising on Iwo Jima. I think Sheepy Queen was one of the actors. Maybe Bill Keaton, and Bill Elkins, Sr., too.

In those days teachers were all keen to teach their charges about Independence Day. Even today we know more details than any of the newer generations. That day signified the declaration of independence, not the day it was won. The Revolutionary War followed with battles up and down the eastern seaboard. I now live minutes from Yorktown, where Lord Cornwallis surrendered to end the war. The earthworks are still there and museums are all about to teach of those days.

The ‘Fourth of July,’ also meant picnics, hot dogs, hamburgers, potato salad, and home-made ice cream. That is what the kids remember. Playing with the cousins and neighbors, running wild with the wind in our faces, and spitting watermelon seeds was really living. We wore special outfits sometimes, usually with the national colors of red, white and blue. Bikes had flags, streamers, and riders with ‘Uncle Sam’ top hats. It was as if the whole universe was celebrating. Once, when I was in Detroit on the fourth, the SS Britannia was across the Detroit River in Canada. The young Queen Elizabeth was aboard to celebrate Canada Day which is also celebrated on the fourth of July. The fireworks display was huge and exciting for me as I watched. Because the Queen, herself, was present and even got international attention. For days pictures of the fireworks covered the front pages of the Detroit Free Press and the Detroit News. The remarkable thing is the unity that was felt by both Canadians and our people. In fact, the unity of the free world had a certain promise of peace and prosperity that followed the horrors of war seen by the world.

Today, people have marches every day for many causes, some good, some maybe less so. How wonderful it would be if we paused for a moment on this important time and remember the sacrifices of those who stood in the gap to protect our right to demonstrate. For that matter, we can do so under the protection of a government that lives under a hood of mistrust. We must use caution and remember that it is okay to debate issues, but not okay to attack others with a different viewpoint. That clearly isn’t American. Rather, as heirs of many rights, we should instead be more about ‘striking up the band,’ and having fireworks and parades to celebrate our grand old flag and the best country ever known to mankind. If we don’t stand up and teach our children to take pride in this imperfect, but great nation, we may lose what we have. 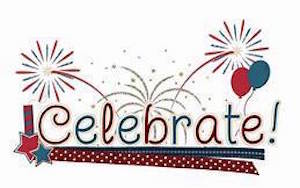 When I remember the pride that we had growing up in this nation, I know I believed in my heart that the foundation our nation is right. Despite some tinkering, it still remains the best. We can celebrate regardless of the issues we may feel are wrong, or the fear that we are worse off than other generations. In fact, we are blessed and should be thankful to our forefather’s wisdom and the grace of the Almighty that we live in this great land. Celebrate! Oh, and while you’re at it, ‘strike up the band.’

KENTUCKY'S HEPATITIS A OUTBREAK IS WORST IN NATION