FRANKFORT, Ky. – During a ceremony in Pikeville Wednesday, Gov. Matt Bevin congratulated Alltech and Dueling Barrels Brewery & Distillery opening its $15 million operation in Pikeville and the creation of 13 full-time jobs.

“Alltech has played a significant role in the commonwealth’s spirits industry over the years, and we are pleased to welcome this new brewing and distilling operation to Pike County,” Gov. Bevin said. “A new day of economic opportunity is dawning in the Pikeville community and across Eastern Kentucky. We wish Alltech continued success and look forward to the positive impact this project will have on the region’s tourism industry moving forward.”

The project included the construction of a nearly 30,000-square-foot facility and the purchase and installation of equipment, such as 19 fermenters and three copper pot stills. The 13 jobs created as part of the project include “storytellers” and managers overseeing the brewery and distillery, visitor center and overall operations.

The operation produces a range of craft beers and moonshine, including Hopfield and McCoy IPA, Pikeville Ale and Apple Orchard, Bonfire, Mountain Flower and Original moonshines. Additional craft beers will be available exclusively in the Pearse’s Place taproom, which will open above the brewery and distillery later this year.

Dueling Barrels was the creation of late Alltech founder Dr. Pearse Lyons, who initiated the development of the distillery as an effort to promote tourism in Eastern Kentucky.

“My father always had a keen sense of potential, and he saw that in abundance in Eastern Kentucky,” said Dr. Mark Lyons, Pearse’s son and president of Alltech. “By establishing a brewery and distillery in the region, he hoped to create jobs, elevate tourism by moving the Kentucky Bourbon Trail east and attract other business leaders to invest in the area.”

Pearse Lyons, an Irish entrepreneur and scientist, and his wife, Deirdre, founded Alltech in 1980 to research and deliver products for the sustainable nutrition of plants, animals and people. The company’s expertise in yeast fermentation, solid state fermentation and the science of nutrigenomics make it a major producer and processor of yeast additives, organic trace minerals, feed ingredients, premix and feed.

“What an honor to celebrate the opening of Alltech’s Dueling Barrels Brewery and Distillery,” Commissioner Quarles said. “Kentucky’s bourbon and beer industries continue to expand, creating economic opportunities for places like Eastern Kentucky. With hopes of joining the Kentucky Bourbon Trail®, Dueling Barrels Brewery and Distillery has the potential of bringing thousands of visitors to visit the scenic Appalachian region. I applaud Alltech for continuing to bring to life the founding vision held by Dr. Pearse Lyons and his wife, Deirdre. This company continues to blaze a trail forward for Kentucky agriculture.” 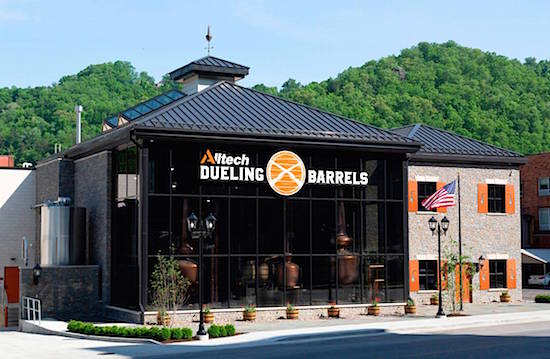 Sen. Ray Jones, of Pikeville, said the operation could have a significant impact on the local economy.

“We are pleased that Alltech chose to make Pikeville home to Dueling Barrels Brewery & Distillery,” Sen. Jones said. “This operation will provide a welcomed boost to the economic base and tourism industry in our region. We look forward to a long and prosperous partnership in Pikeville.”

Rep. Angie Hatton, of Whitesburg, said the distillery could provide long-term value for the region.

“I’m proud to welcome Dueling Barrels Brewery & Distillery, which I am confident will have a lasting impact economically on this region, just as Mr. Lyons hoped,” Rep. Hatton said. “I appreciate all that Alltech has done to make his vision a reality, and I want to thank our local and state officials for working cooperatively with the company to make this facility possible.”

Pikeville Mayor James Carter noted the strong reputation of the Lyons family in welcoming the distillery to the community. 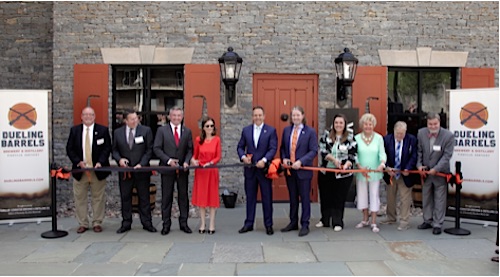 “It has been inspiring to be a part of the journey to bring Alltech’s Dueling Barrels Brewery & Distillery to Pikeville. This is certainly a tremendous addition to Pikeville and is a cornerstone of our economic diversification that will assist in shaping the future of Pikeville,” Mayor Carter said. “It has been an honor to work with Dr. Pearse Lyons, Deirdre Lyons and Alltech to bring their vision of Dueling Barrels to life. They have shared their energy, innovation and love of Pikeville with us every step of the way. We are extremely grateful for their investment in our community and we look forward to the future.”

“Alltech’s Dueling Barrels Brewery & Distillery is a project that has captured the attention of many throughout the community, state and nation. We often have received questions and calls both from locals and from visitors asking when they are going to be open,” Elswick said. “This project has created a new energy, not only in Pikeville, but throughout the Eastern Kentucky region and we are proud to be included in it. We are humbled and grateful for the Lyons’ and their willingness to invest in Pikeville and we will never be able to adequately express our sincere gratitude. We look forward to welcoming the many visitors to Pikeville and Eastern Kentucky to experience Dueling Barrels and hope to share with them the many other wonderful attractions and events we have in the region.”

For more information on Dueling Barrels, visit www.DuelingBarrels.com. More info about Alltech is available at www.Alltech.com.

A detailed community profile for Pikeville can be viewed here.

Information on Kentucky’s economic development efforts and programs is available at ThinkKentucky.com. Fans of the Cabinet for Economic Development can also join the discussion on Facebook or follow on Twitter. Watch the Cabinet’s “This is My Kentucky” video on YouTube.