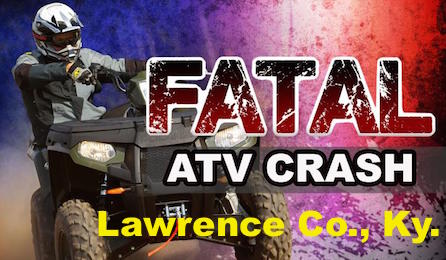 On Sunday June 24 at approximately 11:08 P.M. the Lawrence County Sheriff’s Department responded to the left fork of Little Blaine due to an ATV accident.

On arrival first responders located the ATV and the operator, located just off side of the road. According to the accident report the ATV left the right side of the roadway traveling over a ditch line before coming to final rest.

The ATV was operated by 33 year old Jesse Earl Matthews Jr., formally of Cincinnati, Ohio. Matthews was the single operator of the ATV and was pronounced deceased on the scene by the Lawrence County Coroner.

First responders assisting on the scene were Net Care and the Louisa Fire and Emergency Management. The accident remains under investigation by L.C. Sheriffs Deputy Mack Wilhite.