‘IT WAS SURREAL’: OWENSBORO FIREFIGHTER DELIVERS HIS BABY ON WAY TO HOSPITAL 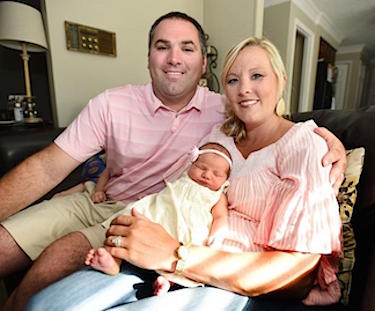 Magdalene Marie Freels sure knows how to make an entrance.

The 8-pound 7-ounce baby girl arrived Friday just before 5:30 p.m. in the front seat of her parents’ 2014 Honda Odyssey van as they rushed to Owensboro Health Regional Hospital.

Luckily, her dad is Lt. Larry Freels of the Owensboro Fire Department.

Superwoman Stacey Freels, that is.

“It was surreal,” Larry Freels said. “It was like something you think about in the back of your mind, but you think it will never happen to you.”

“It’s like straight out of a movie,” Stacey Freels said. “I would never think that would happen to me.”

Magdalene was supposed to arrive Thursday. She decided to come one day later — with a whole lot of drama.

“I kept praying (Magdalene) would come soon because I am going to be the maid of honor at my best friend’s wedding on the Fourth of July,” Stacey Freels said.

With the other three children, Stacey Freels endured 10 hours and more of labor, so she never expected Magdalene’s hurried approach.

“She wasn’t going to wait,” said grandma Shirley Freels of Owensboro. “You can’t tell me God’s plan wasn’t on this whole thing.”

At 4:30 p.m. Friday, Superwoman — er, Stacey Freels — took a bath. At that time, her contractions were still 10 minutes apart, but she texted her mom that she believed they were the “real thing.”

Her water broke as she and her husband put their three kids in the van to head for grandma Shirley Freels’ home in Trinity Hills.

After leaving grandma’s house, the Freelses drove only a block or two when Stacey Freels said, “Larry, I feel the head coming.”

Larry Freels didn’t want to believe it. He told her it was just contractions. “I told her, ‘Don’t push! Don’t push!’ “

He stopped the car and ran around to her side to take a look for himself. Sure enough, Magdalene wasn’t waiting for anyone, so Larry Freels called 911.

As soon as the baby was born, he saw “my brothers (OFD firefighters from Station II) coming down the road.”

They had no idea the call was for one of their own. They only knew a baby was being born in a car.

“It was very rewarding,” Johnston said of the medical run.

For the most part, firefighters respond to tragedies — vehicle accidents, medical calls and burning homes. Magdalene’s birth was a welcome change of pace, he said.

For Larry Freels, it was the first time he’d been on the other end of an emergency. He and his wife are grateful for the care they received from OFD and the ambulance crew.

“At the moment (of Magdalene’s birth), it was really kinda scary,” he said. “But everything turned out awesome. It was something else. God was there.”

By Renee Beasley Jones
The Messenger-Inquirer