Two from Louisa, one from Inez have parts in international tour of Spain including five full concerts

MOUNT STERLING, Ky. — After 10 days of bridging cultural gaps with songs and smiles, Morehead State University’s Concert Choir and Chamber Singers have returned home from their concert tour of Spain. 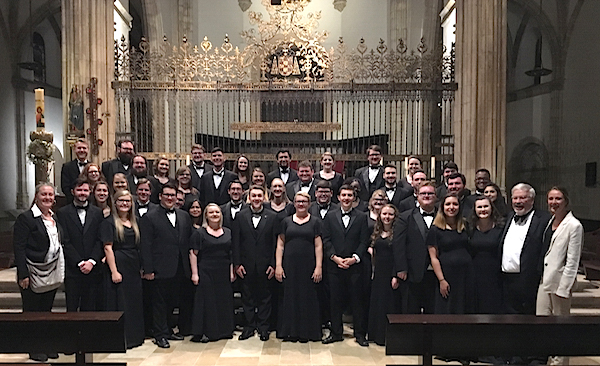 The a cappella program titled “From Darkness to Light” formed a kind of pilgrimage with the overall theme of walking from darkness to light—from the loss of love to the hope of new love, from sadness to joy, from loneliness to the warmth of friends’ and God’s love, and from pain and death to trust, new life and song.

The choirs shared music from Kentucky and the Americas and pieces that honored Spain’s influence in the world.

According to Detweiler, the concerts were enthusiastically received with standing ovations and all the concerts closed with encores including “Pilgrim’s Hymn” by Stephen Paulus.

“It is always great for our students to experience singing in ancient cathedrals with fantastic acoustics and to see how very much Europeans enjoy choral music,” said Detweiler.
Reinhardt, a senior, said his favorite memory of the tour was “having the privilege to sing at the pilgrimage cathedral of Montserrat with the Black Virgin Mary. When we began to sing ‘Dios Te Salve Maria,’ I was overwhelmed with pride. Our choir received applause from an otherwise quiet audience, and we had the perfect stage for such a powerful song.”

“We grew with each performance and it made the ending concert so incredible,” said Broadhurst.

Students observed and participated in Spanish culture in many ways. Highlights included visits to the Royal Palace in Madrid, the cathedrals of Toledo, the Alhambra Palace in Granada, the City of Arts and Sciences in Valencia, Park Güell and the Holy Family Cathedral in Barcelona, hiking in Montserrat, swimming in the Mediterranean Sea, and hearing a Spanish musical ensemble at the good-bye dinner.

“The people in Spain were incredibly hospitable. Our two tour guides confided in me that our group was different from any they had ever met, and that they were going to miss us all terribly. They cried at the airport when we left and that touched my soul more than I can explain,” said Reinhardt.

Broadhurst added, “the trip definitely made me grow as a student, but more importantly, as a human being. I had never traveled internationally before and it was an enriching experience not only to see how the Spanish people live, but how the choir family took it all in. They enjoyed their food quietly and with friends and family.

“There is nothing like an international tour. Both as a member of a group and an individual, I faced my fears, overcame obstacles, witnessed beauty that brought me to tears, and strengthened my voice. I became closer with everyone in the choir.”

“It felt great seeing how our choir touched people’s hearts through our music even though we had a language barrier. Sharing music internationally opens your eyes to new things such as seeing giant mountains, tasting new things like octopus, and hearing new things such as singing in historic cathedrals. I have been blessed by this choir to travel to Ireland, Italy, and Spain within my time here at MSU. I’m so glad I chose Morehead State University for these travel opportunities and hope one day that I can be a future patron to help future tours,” said Jasmine Wheeler, Morehead senior.

“The biggest thrill for me, however, was seeing the students enjoy making music together and striving to touch the lives of all who listened. I will never forget our final concert. How very proud I was and will remain of all of them,” said Detweiler.

To learn more about MSU’s Music, Theatre and Dance programs, visit www.moreheadstate.edu/mtd or call Detweiler at 606-783-2480.