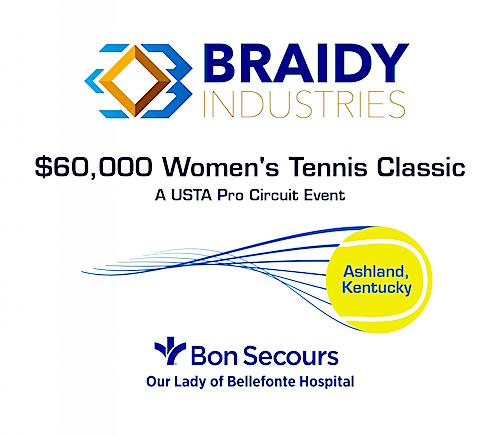 The eyes of the tennis world will focus on Ashland, Kentucky on July 22-29 during the BRAIDY INDUSTRIES $60,000 USTA PRO CIRCUIT WOMEN’S TENNIS CLASSIC. Tournament chairman Dr. Jack Ditty has announced that this year’s tournament will take part in the US Open Wild Card Challenge and will be live streamed on the internet.

The Ashland, KY tournament will be one of three tournaments which will decide the winner of the US Open Main Draw Wild Card for 2018. This winner must be an American woman player who advances through the most rounds and earns the most points in the tournaments taking place in Stockon, CA; Ashland, KY; and Lexington, KY.

Further elevating the tournament to the global stage is the addition of live scoring for all Main Draw matches along with live streaming of matches by the USTA. Over a five-day span, viewers all over the world can watch their favorite players compete in Ashland by logging on to usta.com.

Ditty shared the impact lead sponsor Braidy Industries and the USTA Pro Circuit Tournament will have on the community:

“…It is with great pride and pleasure to welcome the USTA Pro Circuit back to Ashland, Kentucky after our last five tournaments from 2004-2008. The Title Sponsor for those five tournaments was Our Lady of Bellefonte Hospital. This Braidy Industries $60,000 Women’s USTA Pro Circuit Event is made possible by the enthusiasm and hope that has come to Ashland during the past year by Craig Bouchard, who is the CEO of Braidy Industries. In Ashland, Braidy Industries will manufacture the strongest and lightest metal in the world utilizing a highly skilled labor force in Eastern Kentucky. Our entire community has welcomed Braidy Industries for the hope that it has created for a greater future for our citizens. This tennis tournament will shine a national and international light on Ashland, Kentucky during the week of July 21 to July 29, 2018. This will present our community to the world through the professional world class tennis players, officials and administrators in a beautiful public tennis facility with an exceptional tournament committee, generous sponsors and enthusiastic fans.”

Craig Bouchard, CEO of Braidy Industries believes that this region is the ideal location for such an event:

“…Braidy Industries sees exceptional promise in Northeastern Kentucky. We are proud to sponsor this event that brings professional tennis players to Ashland. Soon tennis players and fans all over the world will turn their eyes to our community and experience the hospitality and professionalism that is commonplace in this area.”

Tournament title sponsor, Braidy Industries is a future-leaning advanced manufacturer of metals for the global transportation and defense industries. The company recently broke ground on a $1.5 billion aluminum rolling mill in Ashland, KY.

THOMPSON TO BRING IN K-9 UNIT TO WAYNE COUNTY