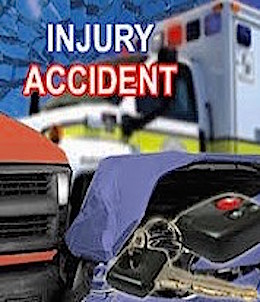 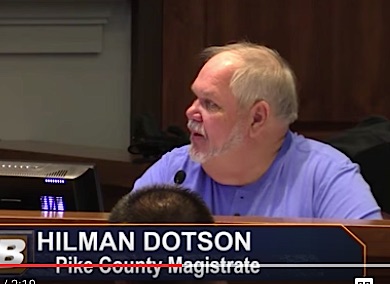 A workers’ compensation report and a liability loss notice were filed recently after Dist. 5 Magistrate Hilman Dotson wrecked a county riding lawn mower while cutting grass at the Hatfield-McCoy Park at McCarr.

The incident brings up questions as to whether Dotson should have even been allowed to operate the equipment. A 1978 ruling by the Kentucky Attorney General indicates the answer to the question is “No.” The ruling states that “magistrates have practically no function as individuals outside of fiscal court meetings.”

According to the workers’ compensation report filled out after the incident, Dotson was “mowing grass when the mower spun its tires and went over a hill” on Tuesday, May 29. The report states that Dotson suffered from injuries to his back and ribs.

“I just had a lawnmower accident. I was mowing grass over there at the Hatfield-McCoy Park … the grass was wet and (the mower) spun out with me and I went over an embankment,” Dotson said earlier this week.

Dotson said that, although the park has an employee who usually maintains the grass, it had not been cut. He said it wasn’t the first time he has cut that grass over the course of the last 25 years.

{Dotson said Tuesday that he is feeling better and was “in good shape,” and he just had a few scratches and bangs.}

When asked if he, acting in a magistrate capacity, was permitted to use county equipment, Dotson said, “If we can’t cut grass and take care of our parks and look after our seniors and our kids, then what good are we?”

Dotson went on to say that he is paid and elected by the people to serve them. He asked “what’s wrong with me cutting grass?” He said there have been opinions from the county attorney that allow the magistrates to “go out and check on things.”

He also said workers’ compensation would cover his expenses.

Pike County Deputy Judge-Executive Herbie Deskins said he doesn’t believe Dotson would qualify for any money from workers’ compensation because of Dotson’s salary.

“There’s a question there as to whether he is covered by workers’ compensation or not,” said Deskins.