When I was browsing the web the other day I came across a list of old TV shows that were popular during my high school days and the years that closely followed. I was overwhelmed by the temptation to ‘click-a-link’ and watch an old program. When I gave in, it led me to a land of rediscovery of pleasant times and warm memories.

During my lunch breaks I have a habit of watching these old shows nearly every workday. I pick my favorite funny shows, but I have seen links to variety shows and others that I will explore when time permits. One link that I watched a week ago was not so much a throw-back to TV’s earliest days, per se, but was a nostalgic look at one of the leading stars during that time. Red Skelton was being interviewed by a young lady on a talk show. The entire show was devoted to visiting with this now-deceased, but beloved fellow. A new, younger audience was treated to what many of us old codgers have known for many years. This man was a truly humble, but highly talented man who spent his life bringing joy to others. He was genuinely honored to be in our homes to bring us a moment of fun.

He was a different kind of comedian than we see today. Early TV lacked today’s sophistication but it was very much at the root of good, really funny comedy. Red sometimes appeared as a little silly, but he brought out the kid in all of us. That was what 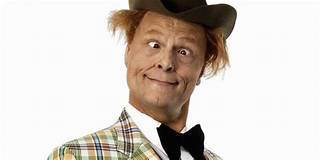 made him a great entertainer. We identified with him or his characters and were pleased by stereotypes in a day that political correctness was not a household term. Whether he was portraying ‘Freddie the Freeloader,’ or Clem Kadiddlehopper,’ he was truly a load of surprises while he fed us some funny, funny stuff.  Who can dispute the visible delight he had when he portrayed two birds, ‘Gertrude and Heathcliff?’ I remember that some in my family couldn’t abide his silliness and his laughing at his own jokes, but Red explained that he was having fun, too, and as such was one with the audience. He was a sweet, sweet man that commented every week that he truly was honored to ‘come into our homes,’ and visit with us as friends.

Red was also known as a talented oil painter. His most famous ones were of clowns, but he did paint landscapes and other things. He had a number of art shows, including his first in Vegas where he sold many paintings. Many of his famous clown paintings and prints were really self-portraits that reflected his character. Others resembled other stars of the day. In his lifetime thousands were sold at prices into six figures. Nonetheless, he was quick to give his work away or donate them to charities. I read that he had earned more money with his paintings than he did in television.

Like all of us, he was not a man without problems. The worse of them was the loss of his son two days before his tenth birthday. Driven to drink he had some rough years. His success in TV brought a lot of friends in the entertainment industry, but also some distractors. Network managers decided his work was too juvenile and lacked support from younger audiences. The long-running ‘Red Skelton Show’ was canceled by the network in spite of high ratings. Red was quoted that this broke his heart. Comedy was an outlet for him and to many of us who watched his outlandish antics. He had come up with many characters, and was known to create some while live on stage. Sure, he laughed at his own jokes, but the world laughed with him.

Another of my favorite memories was about a fellow called Tim Conway. He portrayed several characters, including the ‘old man’ and the ‘old doc.’ He introduced many of them during skits on the Carol Burnette Show. They drew amazing levels of uncontrolled laughter. I know it took great muscle strength to carry out the roles because he would take several minutes just to fall down some stairs. I feel I may be adopting the same, slow shuffle these days. Maybe it’s too much TV. Tim walked as if he was using a walker before they were ever invented. He played on the idea that even short steps will get us there, but it might take a while.

Going further back I enjoyed Cid Cesar and Imogene Coca with their skits. Then there was Steve Allen a truly funny man with loads of talent whose show always had lots of wonderful guest-stars. George Burns and Gracie Allen had a show where George would have a monologue with a lighted cigar. Gracie would join him with her fabulous banter that left us confused about her intellect. Truly, Gracie had to be very sharp to make her clueless character come alive. I remember that she died when she was far too young. Her departure left an empty spot in many of our lives. 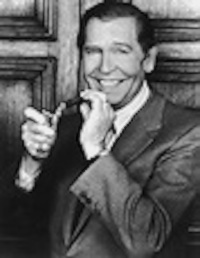 Early TV funnymen were ‘humorists,’ after the school of Will Rogers. This was the opposite of the Lucile Balls and Red Skelton. The ‘straight man’ roles were played by Dean Martin to Jerry Lewis’s funnyman, and Jack Benny to Rochester’s. Milton Berle had a regular program that was popular as any of the comedy-variety shows of the day. I remember Mr. Peepers who had a situational comedy format that attracted friends across TV Land. Out came a host of those comedies that included Gilligan’s Island, Beverly Hillbillies, and Green Acres. The amazing thing is none of these had to resort to off-color jokes, or themes unsuitable for the whole family.

Slapstick was another crossover that often sent audiences into roars of laughter. When Lucy got in over her head, which was often, mayhem was sure to happen. These things bought many of us to tears and holding our sides, while gasping for air. Laughter is good for us. It heals, it distracts, and bonds us into a brotherhood.

Those memories of growing up in truly funny times are precious and very worth revisiting. For those who remember we know that real comedy doesn’t require shock, rudeness, or disrespect. Our memories of those early days of television remind us that there’s a better, more effective way to bring comedy to the audience. Want a reminder? I’ll give you a link here to get you started.

Tim Conway playing the role of the old man. https://www.youtube.com/watch?v=S_9RWUV8MvA