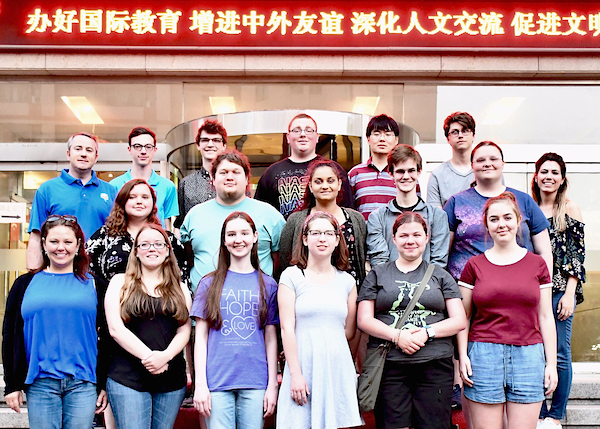 The students have been preparing since August for the six-week long study abroad program, hosted by one of MSU’s overseas partner school, Tianjin Normal University (TNU). In preparation for the program, the students have engaged in readings on Chinese culture, society, history and politics and have watched videos about Chinese education and democracy.

While living and learning on the campus of Tianjin Normal University, the Craft students will study Chinese language, history and culture from faculty associated with TNU. They also will travel to Beijing for a weekend excursion visiting historical and cultural sites, including the Forbidden City, Temple of Heaven, Great Wall and Summer Palace.

“This program is more than exposure to and learning in and about China,” said Jennifer Carter, Craft Academy assistant director. “It’s as much about getting our kids prepared for college and careers. This is our top goal in all that we do. Critical thinking is essential, and cultivating these skills in differing environments is irreplaceable. According to a recent report released by the Association of American Colleges and Universities, employers are looking for critical thinking and problem solving skills. Thinking quickly on your feet, finding solutions, and adjusting to an ever-changing environment all of which are things you learn, do, and apply while studying abroad.”

The program has run since 2012 and this is the second consecutive year that Craft Academy students have participated.

“I couldn’t be happier with the partnership between this program and the Craft Academy. Most of these Craft students need to complete one or two units of foreign language for their graduation but find it difficult to do so within the rigorous curriculum designed by the Craft Academy. I’m happy that this program can solve this issue, while providing these students with a world-class international experience that exposes them to not only the history and language of China, but also to the art, culture and international relations of the world’s most populous country and fastest growing economy,” said Dr. James R. Masterson, associate professor of government and China Program director.

The students also prepared STEM-X research projects, which they will conduct while in the country.

“The opportunity to live and conduct research in a foreign country really sets the Craft Academy apart,” Pidluzny added.