NO INJURIES AFTER GUN FIRED AT PAINTSVILLE ATTORNEY’S OFFICE

‘Person of Interest’ has been identified, police chief says

No injuries were reported and no arrests have yet been made after an incident Monday in which shots were allegedly fired into the office of Robert Miller, a Paintsville attorney. 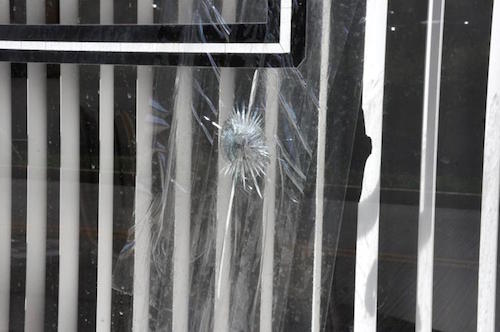 Paintsville Police Chief Mike Roe said officers are reviewing nearby security footage for cars in the area around the time of the incident, and said the round appears to have been from a .22 caliber firearm. Roe said no one was in the waiting room area at the time the shooting occurred.

Roe said a person of interest has been identified in the investigation, but evidence is still being gathered.

“The investigation is in the very early stages,” Roe said. “Capt. (Jonathan) Holbrook is heading it up.”

Miller said his staff is fine, and continued business as usual Monday afternoon, but the timing of the incident bothers him most.

“It was between 2:50 and 2:55 in the afternoon, in broad daylight, which, when school is in session, is the height of traffic in that area,” Miller said.

Anyone with information about the shooting is urged to contact the Paintsville Police Department at, (606) 789-2603.