BOYD AMONG TEN KY. COUNTIES UNDER OUTBREAK STATUS FOR HEPATITIS A

WVA REQUIRING ALL RESTAURANT WORKERS IN AFFECTED AREAS TO GET VACCINE 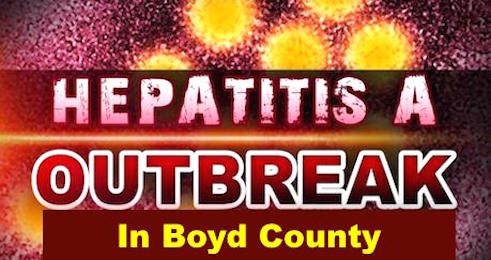 The Hepatitis A outbreak has become a concern for people because the virus is so rare, yet 10 counties in Kentucky are currently under outbreak status and will receive extra funds for vaccines, a state official said.

Howard said Kentucky typically has only 20 cases per year but, as of Monday, 629 cases had been reported since November 2017. The outbreak isn’t limited to the commonwealth.

“As far as we know, it started in San Diego, California, spread to Utah, then almost simultaneously in Kentucky and Michigan,” Howard said. “Now other states around us are having this outbreak. I suspect many, many states across the country will declare an outbreak and will see rising numbers of cases.”
For those traveling during the holiday weekend, Howard said to follow recommendations of health officials in that area.

“Here in Kentucky we recommend people in the outbreak areas get vaccinated, as well as those with risk factors for the disease, such as substance abuse disorder or the homeless.” Vaccinations are recommended for those who are exposed to those populations, he said, listing health-care workers, those who work in church or ministry and volunteer organizations as susceptible.

While West Virginia has recommended all restaurant workers in outbreak areas get vaccinated, Howard says they have not taken the same action in Kentucky.

The City Commission in Ashland, passed first reading of an ordinance on Thursday that would require all restaurant workers in the area be vaccinated. Seven cases of Hep A have been reported by restaurants in the Ashland area. However, Howard said they’ve had “zero cases related to a food worker” so eating out would be very low risk.
“The virus in this outbreak is spreading via contaminated environments,” he said. “But if you live or around folks who at risk for this disease, you should be vaccinated.”

Howard says the outbreak in Kentucky began in the Louisville area and has spread from there. Ten counties are at the outbreak level, which is five cases or more, he said.

Those affected counties are Boyd, Bullitt, Carter, Greenup, Hardin, Jefferson, McCracken, Meade, Montgomery and Warren. Each local health department will receive funding from the state to purchase 1,000 doses of the vaccine, primarily for use by the poor. Hepatitis A cases have now been reported in a total of 41 Kentucky counties since the outbreak started, with six deaths related to the disease.
It’s currently unknown why the sudden spike in Hep A cases, according to Howard. “There is currently research going on at the Centers for Disease Control and Prevention as to why the disease is spreading to a greater degree now. Hopefully, we’ll have answers to that in the near future.

Howard said the best prevention for Hepatitis A is to simply wash hands thoroughly.

“Someone who is infected and has virus particles on their hands touches a surface, such as a phone or a desk or a door knob, and then you follow them and touch it,” he said, explaining the importance of the hand-washing act. “Don’t put your hands in your mouth and wash your hands. Gels do not kill Hepatitis A. You have to wash with soap and water for at least 20 seconds, scrub them good and dry off afterwards.”

He also warns people who are infected may not see symptoms for up to 50 days and can be contagious two weeks before symptoms manifest themselves.

“There’s no need for a panic, but people do need to be aware there’s an outbreak going on and take appropriate precautions,” Howard said. “If you think you’ve been exposed, get vaccinated.”