Growing up in Louisa – Trikes & Bikes!

Growing up in Louisa – Trikes & Bikes!

My earliest memory of personal travel wasn’t about automobiles. We didn’t own one so it was a rare thing for us to go anywhere. I remember times of travel on the bus when I usually got sick from the fumes and the curvy roads. We also went on a train, but that was really rare. I mostly just watched them roll by. If I was lucky I’d see the engineer and wave. They always waved back as if I was their friend.

My first personal conveyer was a trusty stroller. I remember dim memories of her wheeling me and pushing back the visor to show off her sweet dumpling. Frankly, those memories are like faded tintypes that today I can barely make out. The family pram had been passed down from my cousin George who was three years my senior, for me and then for my cousin Julia who was junior to me by three years. We all graduated to a stroller once each of us were able to sit up. This contraption was made of both wood and steel and had some faded colored beads around the tray in front. I remember playing with those beads, but never noticing that the paint had nearly worn off on the beads and tray, alike. The wheels were made from a metal disk and wrapped with solid rubber tires. There was a space behind the back of my seat that allowed for mom to stick her purse or packages as she pushed me around. 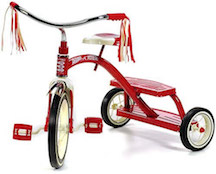 A red, metal Tricycle became part of our fleet once I was walking and able to push myself along. It took a week or two for me to learn to pedal. Meanwhile, I would often push and find I had entrapped my foot under the back of the bike. It took careful maneuvering to extract the aching foot, usually bringing its share of wet tears and loud crying. That became my incentive to use the pedals since they were far in front of danger. My cousin George was too big to use the trike, but he loved to stand on the little platform above the rear axle and push me down the sidewalks. Again, if I wasn’t careful I could be caught up under the rear as before. There were times that the big front wheel would turn and cause us both to tumble. After being consoled by mom, and George getting a dressing down for his disregard for safety, I resumed my play with the dangerous little tricycle.

It was mid-summer, likely around Independence Day, when George got his first two-wheel bicycle. This was long before the day of training wheels so we had to suffer the learning curve wreaks commonly known to kids all around. We got help from mom and got some sermons, too, relating to safety. While traffic in our little town wasn’t heavy, we still had automobiles and trucks traversing the streets and avenues. We promised to stay away from those by riding on the sidewalks and lots around our home.

I remember when George added decorations all over his new bike. It was the fanciest bike in the neighborhood. He used crepe paper colored in red, white and blue, between the spokes of the wheels. He mounted small American flags next to the handle-bar grips and put another above his rear reflector. Wow, this bike looked really good! It was later in the day when I learned he would be riding his bike in the big parade that was to be held on a Saturday, or a holiday. My mother had been a member of the LHS band and had marched those streets before. There were all kinds of floats and the old open cab, ‘crank’ fire engine. That was replaced later when the town bought a newer truck that I would later use when I was a volunteer. 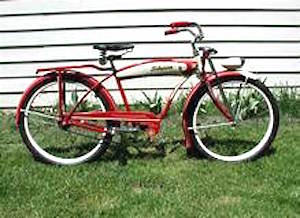 It wasn’t until I was in the first grade when I got my first bike. I remember flashes of my mom pushing me down Clay Street (a new home away from the Louisa Inn) toward Franklin. It was wobbly at first but I began to catch on after a day or two. Even that came with scrapes and bruises, and mom applying tons of Band-Aids and gauze. She used several kinds of antiseptic liquids each with their own disagreeable characteristics. I know that the alcohol burned and that methylate and iodine gave reddish stains or gave minor stings, too. But being all boy I saw the ‘boo-boos’ like merit badges. I was paying my dues, for sure, but the rewards would come in time. Mom had a cure for everything, but if she didn’t there would be a lady friend that would tell her about a home remedy. They were still better medicines than ‘castor oil’ I was force-fed when mom thought it good. I remember liking sassafras but not they say it is bad for you. Oh, well.

It was on ‘Wheeler’s Hill,’ that I had my first serious wreck. That little dip, which I saw on a recent visit seemed steep in those days. I began my descent downhill on Pocahontas leaving from Lady Washington Street toward Clay Street. At the bottom of this grand hill my head somehow went through the front wheel spokes of my bike causing both the bike and my head some serious damage. My forehead still has a lump, though not so pronounced as then. Perhaps this bump defined what the rest of my life would be. Who knows? Well, my cousin George saw the crash and ran home screaming that I had been killed. Here came mom and half the neighborhood running with medical supplies. If we had cell phones in those days no doubt an ambulance would have been called, perhaps from the Curtright or Young’s Funeral Homes. The first miracle of the day from my point of view was that I was still alive. A second miracle was that my head was disengaged from the broken wheel without inflicting additional injury. A third was when we were able to get the bike fixed.

This was a time when Schwinn was the King for making classic models designed to impress. The so-called English bicycles where not yet part of our lives. When they came in I saw my first ‘gear shift’ on my brand-new ‘three-speed,’ bike. Frankly, I never understood why I needed three speeds and found two of them as making my biking life harder, not better. Other generations would get ten-speeds, or even more gears, I guess. They weren’t wrong, but just came from another time.

I think the most negative things about bicycles is their propensity to eat trouser legs. If the chain guard was in place that was less of an issue, but when the chain had to be put back on the chain guard was in the way. Putting the guard back on was an extra step, so we lazy boys rarely ever bothered. We ended up having to roll up our jeans or risk that pants-leg would be frayed and caught up in the works. Shorts were a help in the summer once they were in style, but for a time it was only jeans or pants for us. I was skinny to start with, rarely buttoned by shirt to cover my bare stomach, so rolled up britches and an askew baseball cap made me look like some circus clown. Such was the cost of having and loving our bikes.

Over the years I became a better bike rider often taking my heavy Schwinn bike down Town Hill without a mishap. That was a long way from my experience on ‘Wheeler Hill.’ (Named for Charley Wheeler). Johnny Bill and I once rode our bikes all the way to Fallsburg just to ask two girls for a date that night. Johnny Bill thought he might have the family station-wagon that night if they said ‘yes.’  The trip met disaster when we were halfway up a big hill we were spotted by Eddie Boggs, Johnny Bill’s dad. We were instructed to put our bikes in his station wagon and get in. He took us to his home and delivered a sermon I still remember. We got the chewing out of our lives. With heads hanging low we expressed our sorrow for not thinking about the dangers and promised to never, never do that again. True to our word, we didn’t take our bikes out on the highways again, but we took a boat trip down the Big Sandy that may have topped everything in terms of dangerous. 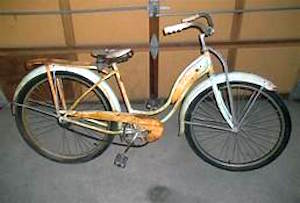 When growing up, aside from dating a nice young lady that had a car, or going with some friends in borrowed cars, my only choice was to walk or mount my two-wheeler. The relatively small town made this an acceptable choice. After all, parking a bicycle and remembering to retrieve it later, was a bit of trouble. ‘Now, where did I leave that thing?’ Shoe leather became more and more important. If the trip was down to Dee’s to meet up with friends there was always a chance someone with a car would pick me up. The bike would have been a handicap and maybe cost me a fun trip to the drive-in in Ironton. My image was suffering because how cool is it to be nearly ‘grown up’ and still be peddling a bike around town?

If I needed to go to Johnny Bill’s house the bike was a good thing. If we went off doing something I would be able to choose to take the bike or leave it there. Then there were times when my good old steed was in disrepair. Whether it needed a new chain, a tire patched, or spokes replaced it was still out of commission, so walking was my other choice. So I would amble along kicking a can, or a rock, down the street. After joining the Air Force I was home for a visit. The last time I saw my bike was I had joined the Air Force. My cousin Julia used it to ‘toot’ me out of town, just past Hinkle’s Motel and Restaurant, where I thumbed a ride to back to Virginia. Until then my bicycle had been my primary mode of transportation. I guess the old beat-up ride is somewhere in bicycle heaven.

While walking I sometimes dreamed that someday I might afford a car of my own. I’d have to get a driver’s license and be able to pay for gasoline, insurance and the occasional repair, but it would be worthwhile nonetheless. Oh to have the ability to pick a direction and burn up the local highways. In my thoughts I imagined I might even go as far as Huntington, maybe even further if I had good reason.

Fulfillment of this dream would require my getting a job. Then again, having a job would restrict me from having the time to go anywhere, so maybe the better solution was to relax and just let things happen as they might. Meanwhile, I rode my bike around town to see if anyone was doing anything. Who knows? Maybe they would let me join them.