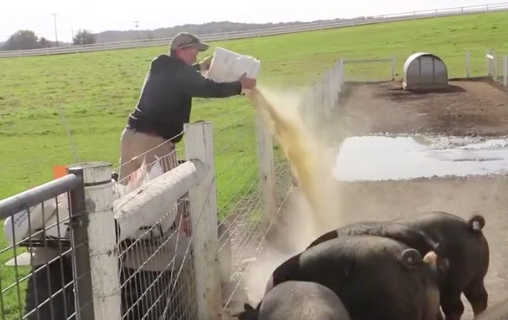 4-H has been helping students gain confidence and learn about animal husbandry for more than 100 years, and a Pennsylvania teen has taken those lessons to heart with extraordinary results, Alexis Lesher reports for PBS NewsHour’s Student Reporting Labs series, Making It Work.

When Dakota Grumbine was 8 years old, he raised some pigs for a 4-H project. But with hard work, the Lebanon teen has turned that project into a profitable business breeding pasture-raised Berkshire pigs and selling the meat to butchers and restaurants. Berkshires are a specialty breed that bring more than a dollar more per pound than regular pork.

Grumbine’s Berkshires now has 20 sows, four boars, and nearly 200 customers, but he had a lot to learn to get his business off the ground. “When I first started off, I didn’t really have any luck as far as the breeding standpoint goes,” Dakota told Lesher. “I couldn’t get pigs settled. The litters were small. Not many of them had a second litter, or they just didn’t work out. So it took me a while to get a sow base built up.”

Dakota said that even if he doesn’t stick with raising hogs as a career, he’s glad he’s learning how to manage time and money, as well as other skills. His dad, Darren Grumbine, agreed: “The younger you are when you start something, the easier it is to pick it up. I see other kids don’t enjoy certain opportunities such as public speaking and talking to strangers. He did that stuff at such a young age, that now he doesn’t even really think about some of those things that hold a lot of kids back.”