SUSPECT, WHO TOOK OFF WITH SHOOTING VICTIM’S VEHICLE, WAS FOUND THE NEXT DAY IN WILLIAMSON;

MAN WAS ALREADY IN CUSTODY IN REGIONAL JAIL IN WVA ON SEPARATE CHARGES, BOND NOW $100,000 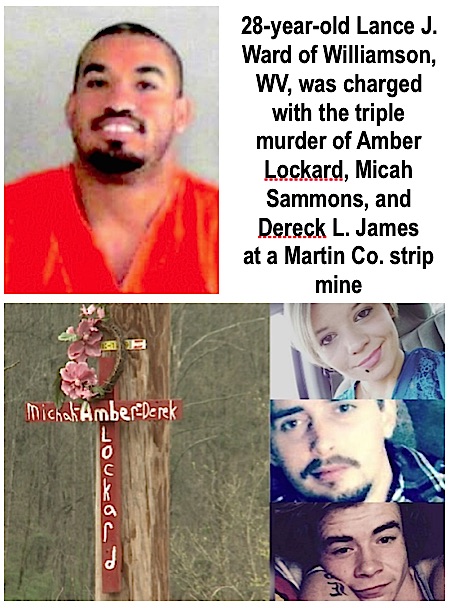 More than a month after three people were murdered in Martin County and no official word on who the shooter might be, a grand jury has indicted a man in the triple-murder case.

28-year-old Lance J. Ward of Williamson, West Virginia, was reportedly charged as a result of evidence presented to a Martin County Grand Jury on Thursday, May 3.

Ward was charged and indicted with three counts of murder and two counts of first degree robbery.

Testimony was given to the Martin County grand jury by the Kentucky State Police Detective leading the case.

On March 23, the bodies of Micah Sammons, 20, of Kimper, and Dereck L. James, 26, of Huddy, were found on a strip mine at Goff Hollow, along Route 292 in Martin County, near the Pike County line. A third person found at the scene, Amber Lockard (also known as Amber Bates), 31, of Huddy, who was wounded during the shooting and taken to an area hospital, died five days later.

A warrant has been issued for Ward’s arrest, but he is currently being incarcerated in the Southwestern Regional Jail in Logan County, West Virginia on unrelated charges. Once the warrant is served, the 24th District Commonwealth’s Attorney’s Office will begin extradition proceedings.

Ward will be arraigned in Mingo County court May 17.

Dereck James’ family says they are thankful for the indictment. “It doesn’t seem like a long time but for us, it has been a long time coming,” said Wade Smith, who is James uncle.

Smith says they believe this is a step towards closure. However, they still want answers.

“We want to know the one who did it,” Smith said. “For them to come to justice.”

“We are devastated for all the families,” Karen Maynard, Dereck James’ mother, said. “Just some kind of closure, you know, we still want answers as to why.”

(Note: An indictment is not proof of guilt or innocence but a decision by a grand jury that there is enough evidence to move to trial.)

SHEPHERD 'BRILLIANT' AS HE LEADS PAWTUCKET TO SHUTOUT VICTORY