U.S. Congressman Harold “Hal” Rogers discussed a myriad of topics during a visit to the Big Sandy Area Development District in Prestonsburg this week. 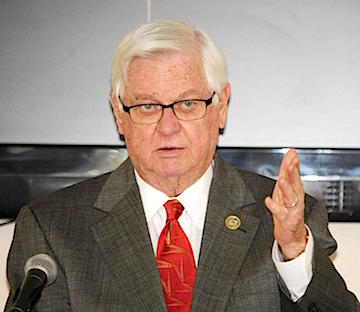 It was part of a regional tour, during which Rogers made stops in Magoffin, Floyd and Johnson counties on Monday.

He talked for about 30 minutes, covering numerous topics, including the presentation of a Bronze Star to 99-year-old World War II veteran Albert Patrick in Magoffin County and appearances planned in Paintsville later that day.

Talking about work which has been undertaken recently in Congress, he joked about Kentucky’s most recent legislative session.

“I also want to give you a little update about what we’re doing across the region, and what’s going on, somewhat, in Washington,” he said. “You may not want to hear a lot of this, but John (Blanton) I think, maybe Frankfort sort of beat us out of Washington, with all the fun and games that went on there. I watched from afar.”

“We’ve got almost half of the Marines’ planes can’t fly. We’ve got ships that can’t be sailed, planes that can’t fly, and so on, so we beefed up the military spending substantially,” he said. “We’re borrowing to do it, and I don’t like that, but there’s no other way.”

“Beginning next year, we’ll have a simpler, fairer system with bigger tax breaks for 90 percent of Americans, giving you more money to take home in your paychecks,” he said. “In fact, by the end of the year, I’m told most Kentucky families will bring home $2,000 more in their paychecks than last year.”

That Tax Cut and Jobs Act has been highly praised by Republicans like Rogers. It increased the standard deduction for married couples from $12,000 to $24,000 and, among other things, cut corporate tax rates.

“Over 500 companies, and counting, have already announced pay increases, bonuses, or extended benefit packages for their employees as a direct result of the tax bill that’s been passed,” Rogers said. “And that’s going to continue, and the economy is booming country-wide. We’re feeling some of the effects here, and I hope and pray that, that growth continues in a big-time way.”

He did not mention any Ky. projects resulting from the tax bill.

He also mentioned the need to cut entitlement spending in America, talking about how those programs have grown since he started in congress in 1981.

He said that’s “not smart.”

“So of the total federal spending of $4.1 trillion, we only appropriate a small part of that, and that’s not smart, but the country has not mustered the challenge to trim back entitlement spending,” he said. “And, this being an election year, I don’t expect anything in that regards. Nevertheless, it is a problem that continues to grow.”

He talked about the “important investments” in the military, to fight the opioid epidemic and fund infrastructure and economic development projects.

He talked about the creation of Opportunity Zones designated in 24 counties, including Floyd, Pike and other local counties, saying it should encourages business to expand in Eastern Kentucky.

Lawrence County is not included in the Opportunity Zones project but Martin County is.

Rogers also talked about a pilot Abandoned Mine Land program, which has provided more than $80 million for projects in Kentucky over the past three years, including the Prestonsburg-to-David rails-to-trails funding announced last year.

He said coal companies paid in $4 billion to restore old, abandoned mine lands, but it wasn’t getting used, so he “dipped into” that and “earmarked” it for abandoned mine lands that could be converted into “something useful, economically, to create jobs.”

He said AML funding was recently awarded to Martin County to fix its water infrastructure problems.

“I’m thankful the war on coal has abated, that’s the good news,” he said. “The bad news is it left us devastated. So, the war on coal is real, and despite the downturn in the economy, you come together under this umbrella group called SOAR, Shaping Our Appalachian Region, and we decided that we’re not going to stand for it. We’re going to fight for it. We’re going to pull together.”

Praising SOAR — an organization he co-founded years ago — and innovations at the Morehead State University’s Space Science Center, Rogers said the region is imagining new ways to build its economy.

“In Magoffin County, the Mountain Parkway is making the region more accessible,” he said. “I’m really teed off that it’s going so slow. That project over there is so important, it’s so critical, not just to them, but to all of Eastern Kentucky. So, I hope we can kick them in the rump somehow to get it done quicker.”

KY. HUSBAND 'WELL ARMED AND THERE TO HUNT' WIFE, LOVER