KY. HUSBAND ‘WELL ARMED AND THERE TO HUNT’ WIFE, LOVER

HENDERSON, Ky — When Christopher Hancock arrived at Tyson Foods on the afternoon of April 12, authorities said he was well-armed and there to “hunt,” according to police. 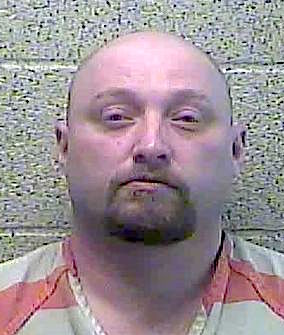 According to testimony from a preliminary hearing in Henderson District Court, Hancock, 42, Madisonville, had with him four guns, one large knife and six boxes of ammunition. He’d also allegedly made public threats on his Facebook page that he was going to kill his wife and the man with whom she was allegedly having an affair, who was employed at Tyson Foods’ facility in Henderson County.

Henderson County Sheriff’s Cpl. Anthony Willett testified that on April 12, the sheriff’s office was dispatched to Tyson Foods due to information that Hancock was on his way to the plant to kill a man he believed was having an affair with his wife.

Willett said authorities were given a description of a red Mercury which Hancock would be driving.

Sgt. Carroll Morrow went to the main office at Tyson to escort the alleged target to safety. Meanwhile, Deputy Matt Brooks secured the parking lot because he has a license-plate reader equipment in his vehicle; and Willett said he was positioned at entrance, according to court testimony.

Willett said Brooks then joined him at the entrance not long before the red Mercury carrying Hancock, his wife and his two children, both under the age of 6, pulled into the Tyson parking lot. Willett said based on the physical description of Hancock, he was able to identify Hancock as the driver.

According to Willett, Deputy Brooks attempted to stop Hancock’s vehicle by heading it off and Hancock allegedly tried to drive around the cruiser. However, Brooks was able to outmanuever Hancock and stopped his vehicle, Willett said.

“Deputy Brooks’ had his emergency lights activated when he headed off Hancock’s vehicle,” Willett said.

“After being stopped, Hancock stepped out of the vehicle and as he did, a pistol magazine fell on the ground at his feet. It was later identified as a 9 mm magazine that goes to the 9 mm gun he had on him,” Willett testified. “There were bullets in the magazine. I did a pat down of his person, and he told me he was carrying a 9 mm pistol on his right-hand side … It had a full magazine with a round in the chamber.”

Willett said that Hancock has his concealed carry permit.

There were bullets in his pocket and a large knife and more bullets on the floor of the driver’s side, the sheriff’s corporal said. A further search of the vehicle resulted in other guns being located, including a .22; a 20-gauge shotgun and a .410, Willett said.

‘He was going to kill them both’

“After we detained Mr. Hancock, I spoke to to Misty Hancock, his wife. She said that Hancock said he was going to kill the guy she was sleeping with. She said that’s why they were at Tyson. She also said the night before is when Hancock found out his wife was having an affair and ‘beat her up.’ She said Christopher held her hostage and wouldn’t let her call anybody.”

Willett said those incidents from April 11, the alleged beating and confinement, occurred in in Hopkins County and Hancock has been charged with those offenses there.

“After receiving the BOLO and before heading to Tyson, Deputy Brooks accessed Christopher’s Facebook page where he had posted comments that his wife was sleeping with someone and ‘he was going to kill them both.’ “

Willett said authorities took a screenshot of the Facebook page as possible evidence.

“Misty Hancock also said that her husband told her ‘I’m going to enjoy this, killing me a (the n-word).’ ”

“Based on all the evidence we had, I placed Hancock under arrest. Hancock said he wasn’t there with the intention of shooting his wife’s lover. Instead, Hancock said he was there to confront the man and to tell the man’s wife, who also works at Tyson, about the affair,” Willett said.

As the investigation proceeded, Willett said he spoke to Misty Hancock’s sister who had been living with the Hancocks.

The sister said that the day Christopher Hancock found out about the alleged affair, he would not let her or her sister leave the house or use their cell phones, Willett testified.

According to Willett, the sister told authorities that Christopher Hancock also threatened to kill everyone in the house which at the time was also occupied by several children.

The sister allegedly told authorities that the next day, Christopher drove Misty and the kids to the doctor, but prior to the trip, Misty was able to slip her a note with the name of the man Christopher wanted to kill and also provided as much information as possible, Willett said.

The sister told law enforcement that after Christopher and Misty left, she got her children and went to her mother’s home. She also called Tyson to warn them of what was supposed to happen and that Christopher Hancock was armed and with what type of guns he was armed with, Willett said.

The sheriff’s corporal testified that later in the investigation, he again spoke with Misty Hancock who claimed that her husband had been texting his cousin who is an attorney. Misty Hancock alleges that the cousin texted her husband saying, “if you’re going to do it, just do it and don’t talk about it.”

Willett answered no to both questions.

Daniel Hancock said, “Does it surprise you that that’s who I am?”

Daniel Hancock then asked if Christopher Hancock was able to make contact with the man at Tyson he was allegedly there to confront or to pull a gun on him.

Willett answered no to both. “He never touched him or was able to speak to him?” Daniel Hancock said.

“(Under state law), a person has to perform a substantial step toward the commission of a crime … and that the act leaves no reasonable doubt as to the defendant’s intention to commit the crime he/she is charged with,” Hancock said.

“We don’t have that whatsoever. We have an online threat made while he is in another county and then his appearance at the workplace of the gentleman having an affair with his wife. He never made contact with the man. Never spoke to him. Never touched him. He didn’t attempt to murder anybody. He was angry as many husband would be,” Hancock said.

“He reacted and made a post on social media. I would argue that we’ve all said we’d kill somebody but we didn’t mean it. He had a license to carry that firearm. He didn’t do anything illegal with that weapon. At most, what we have is third-degree terroristic threatening. But it’s certainly not attempted murder.”

‘This was going to be a premeditated murder of the man’

“In response to the argument that he didn’t touch him, he didn’t shoot him … Thank God,” Gold said. “It was going to happen. Every substantial step had happened. What it was was premeditation. This was going to be a premeditated murder of the man having an affair with his wife and based on the evidence, the murder of his entire family. This was a powder keg waiting to happen and thank goodness that the police did get there in time.”

“Talk about substantial steps, (Christopher Hancock) loaded his family into the car. He took plenty of weapons and had extra bullets in his pocket. He goes to the place his wife works and had no other reason to be there except to do what he’d said he was going to do which was to go hunting,” Gold said. “I fully believed had he been able to get around the deputy that something may still have happened.”

“He should not bear the benefit to say that I didn’t get to commit my murder therefore, I didn’t attempt it,” Gold said. “This was attempted murder and substantial steps were taken. Every bit of information given to law enforcement was absolutely true, down to to the catalogue of weapons he had on him. Yes, this was an attempted murder, it did not happen and thank goodness for it.”

At the end of the hearing, Judge Brady found probable cause for the attempted murder charge.

By Beth Smith
The Gleaner