A day after the state Board of Education ousted Education Commissioner Stephen Pruitt, area superintendents say the move bolsters their claims that Kentuckians are in the midst of an attack on public education. 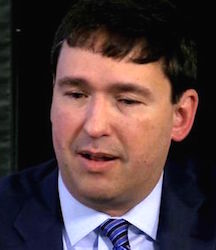 Pruitt resigned Tuesday with a year and a half left on his contract after the state Board of Education — which hires and fires the education commissioner — convened a four-hour special meeting in private.

Before that, however, Pruitt talked with reporters about how he did not want to leave, the Associated Press reported.

The board later appointed Wayne Lewis as interim education commissioner. Lewis, a senior administration official for Gov. Matt Bevin, also worked with former secretary of the Education and Workforce Development Cabinet Secretary Hal Heiner, who was appointed to the state Board of Education on Monday.

Lewis had a hand in drafting Kentucky’s charter school law that was passed last year.

The Associated Press reported that Pruitt left the board meeting shortly before his resignation was announced. He told reporters earlier in the day that he would “always stand for public education, wherever I am.”

Scott Lewis, Ohio County Schools superintendent, said he was “obviously disappointed” by the board’s action, and described Pruitt’s resignation and Lewis’ appointment as interim education commissioner as “an orchestrated deal.”

“The sad part about that is Dr. Pruitt was a fine leader and a fine man and was doing really good work with our school districts,” Scott Lewis said. “He has one agenda and that was what was best for students.”

With Wayne Lewis being named in the interim to Pruitt’s former post, the Ohio County’s superintendent said “charter schools are going to be a big push.

“If charter schools are so great, then take some of the regulations off (public education) and fully fund us and see what the results are,” Scott Lewis said.

Brake said more than 90 percent of Kentucky students will attend public schools, and it’s worth noting about half those students live in poverty. State officials can’t lose focus on the transformative nature of public schools for all children, he said, by just focusing on a narrow percentage who could potentially attend charter schools.

Brake also mirrored Scott Lewis’ sentiments that he has enjoyed working with and respects Pruitt.

“He has been a class act,” Brake said. “He (has been) competent, professional and an outstanding educator.”

Even though Brake said the circumstances under which Pruitt resigned were “heavy handed,” he is open-minded and looks forward to working with Wayne Lewis.

Matt Robbins, Daviess County Public Schools superintendent, also said he is disappointed in not only Pruitt’s resignation, but the manner with which it took place.

The Associated Press reported Wednesday that Pruitt’s exit was precipitated when Bevin used expiring terms to replace most of the state Board of Education. His appointments included two of his former top aides: Heiner and Amanda Stamper, his former communications director, and five others.

“(Tuesday) there were seven new board members sworn in as new Kentucky School Board members, and on the same day they are sworn in, they also dismiss the top educator in the state,” Robbins said. “It would be hard for me to understand how they could have so much information and knowledge by which to take such action.”

Robbins said this is not the way business should be conducted.

He said on a personal and professional level, Pruitt’s resignation “is a huge loss for us.”

“I found him to be very intelligent, very approachable,” he said.

Muhlenberg County Schools Superintendent Robby Davis said in an email that he is disappointed with Pruitt’s resignation and how it unfolded.

“Commissioner Pruitt has always been approachable and in tune with what is going on with our students in schools,” Davis said, and that students’ best interest were in mind when Pruitt made decisions.

Davis said the resignation makes him wonder what’s next for public education.

Shannon Lindsey, the interim superintendent for McLean County Schools, said she was “devastated, along with all the surrounding counties” because of this change in education commissioners, especially because Pruitt has always been supportive of the district.

She said Pruitt came to visit McLean County Schools, interacted with students, and even video chatted with faculty on the district’s opening day.

“He took time our for even the small districts, and that meant a lot to us,” she said.

Kyle Estes, superintendent for Hancock County Schools, said he and others in similar positions have been saying for some time that public education is under attack, and that situation surrounding Pruitt’s resignation deepens that belief.

Estes said Pruitt had positive reviews with those he worked with in the Department of Education and superintendents across the commonwealth.

“Now, we have completely put a halt to what seemed to be progress, and there is a lot of uncertainty,” Estes said. “These are uncertain times.”

He said a lot of eyes will now be upon the Kentucky Board of Education and the new commissioner.

“There will be a lot of skepticism and hopefully they can overcome that,” he said.

By Bobbie Hayse
The Messenger-Inquirer