Democrats say bill ‘sure to be thrown out in court’ 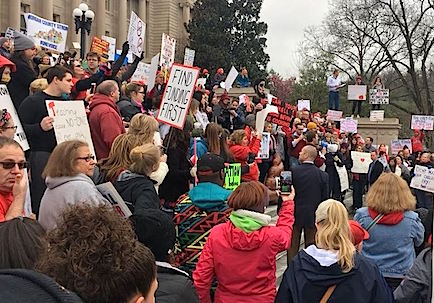 Senate Bill 151, the final version of the legislature’s pension reform bill, was sent to the governor’s desk March 29. Secretary of State Alison Lundergan Grimes’ office received the bill — emblazoned with the governor’s signature — around 6 p.m. Tuesday, according to her communications director, Bradford Queen.

Bevin signed the pension bill into law one day after he vetoed two other high-profile pieces of legislation: The tax reform and budget bills crafted by Republican leaders in the Kentucky House of Representatives and the Senate.

When he told reporters about those vetoes Monday morning, he also cautioned that SB 151 “doesn’t even come close” to solving the state’s pension crisis.

When Bevin said he had signed the pension bill during an interview on WHAS Radio late Tuesday afternoon, he made similar comments about the need for additional reforms.

“Again, is the bill what it could’ve been and should’ve been and ultimately needs to be? No,” he said. “But is it a very good bill, in that there’s nothing in it that’s bad for Kentucky? Absolutely.”

Bevin praised the legislators who backed the pension bill because it was “not an easy vote.” (No Democrats voted for SB 151 when the legislature passed it last month, and some Republicans voted against it too.) 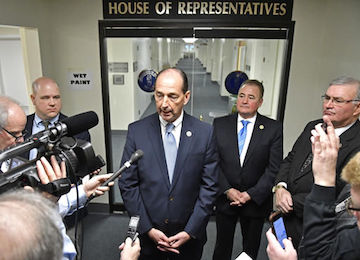 “The other Democratic House members and I are deeply troubled by the signing of Senate Bill 151. This piece of legislation – written in secret and passed in less than nine hours – negatively impacts the retirement systems for teachers and public employees and is certain to be thrown out in court. This law will also cost those very same taxpayers billions of dollars more over the next 30 years by resetting the timeframe to pay off the state retirement systems’ liabilities. I cannot think of another law that will cost us more and provide us less than this one.”

“These folks stepped up and did what was right for Kentucky,” Bevin said Tuesday of those who supported the bill. “And it’s the first of many steps that will ultimately need to be taken if we’re going to actually keep sending pension checks to people.”

Teachers’ unions and many rank-and-file educators participated in public protests after Republican legislators unveiled a surprise version of the pension bill on March 29.

The updated proposal was attached to SB 151, which originally focused on wastewater services, and passed the House and Senate the same day it was introduced. Since then, many critics of the pension bill have referred to it in terms of sewage.

After Bevin signed SB 151 Tuesday, Kentucky Democratic Party Chair Ben Self quickly responded with a statement criticizing the governor and GOP leaders in the legislature.

“By signing this pension-sewage bill, Gov. Bevin and the Republican leadership have just dealt a devastating blow to Kentucky’s public education system, public employees, the teaching profession and benefits for first responders,” Self said. “It’s obvious that their priorities are to the mega-donors who paid for their campaigns and not the people of Kentucky.”

Teachers have been the most vocal group of stakeholders throughout Kentucky’s months long debate over pension reform.

Here are some concessions teachers got — and those they didn’t — in the pension bill Bevin just signed:

New Kentucky teachers will no longer be guaranteed defined retirement benefits. Instead, they will be placed into a “hybrid” retirement plan that includes features of both a traditional pension — like teachers in Kentucky have now — and a 401(k)-style savings plan. In this hybrid plan, teachers would contribute 9.1 percent of their salary to the plan, while employers would contribute 8 percent. The plan is portable, meaning that if future teachers decide to leave Kentucky public schools, they can take their plan and benefits with them.

The bill does not include any reduction in annual cost-of-living increases for retired teachers, leaving them at 1.5 percent. Earlier versions of the pension bill had proposed not only reducing the adjustment, but also freezing it for five years.

Under the bill, teachers would only be able to use sick days that they’ve accumulated through Dec. 31, 2018, toward calculating their retirement benefits. An earlier version of the pension bill had capped benefits at the number of days accrued through July 31, 2018.

This change was originally proposed under the Superintendents’ Shared Responsibility Plan, which the Kentucky Education Association supported.

Teachers will be able to cash in sick days earned after January 1, 2019, when they retire.

The bill requires Kentucky Retirement Systems employees hired between 2003 and 2008 to pay an additional 1 percent of their pay for health care benefits in retirement. An earlier version of the bill would have had employees contribute a phased-in amount of up to 3 percent.